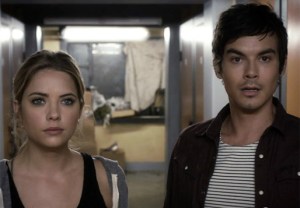 Hanna and Caleb have solidified their status as one of Pretty Little Liars‘ most pivotal romantic couples. Their status as forensic experts, however, remains very much in question.

Desperate to erase any false evidence connecting her to Mona’s murder, Hanna on Tuesday plotted to steal the barrel — and whatever, or whoever, was inside it — from the storage facility, but she didn’t count on Officer Toby and Lieutenant Tanner busting her and Caleb mid-deed.

Though I’m not exactly sure how, the couple managed to slink back to Hanna’s house, where she tried to put a little distance between them. “I’m dangerous to be around right now,” she told Caleb, who delivered one of his finest I’ll-always-be-there-for-you speeches yet and snuffed out any chance of a breakup.

Meanwhile, Spencer and Aria nearly became human froyo when “A” led them to an abandoned ice cream factory — every town’s got one! — and trapped them in the freezer. Thanks to Emily’s quick-thinking, as well as her default instinct to beat things with a wrench, both halves of #Sparia made it out just in time to avoid any permanent freezer burn.

And now, for this week’s relationship drama… 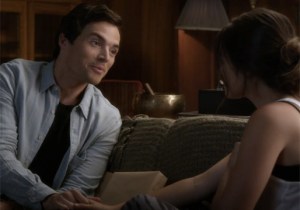 EZRIA | Despite everything I screamed at Aria through my television screen, she still decided to show Ezra her letter to Jackie. But much to her surprise — and definitely to mine — he was totally cool with it, telling her, “You did what you had to do to get in.” Then again, a second read of the letter inspired a different thought in Ezra’s head: “I want what’s best for you,” He told Aria, adding that he doesn’t want to be the reason she misses out on any more life experiences. Could this really be the end of #Ezria? Again?

SPOBY | Speaking of couples in limbo, things aren’t looking much better for Toby and Spencer, following yet another brutal fight. Not only was Spencer furious with Toby for not warning her that Tanner was on her way to the storage facility earlier, but when he refused to tell her what was underneath the lid of the barrel, she pretty much flipped hers. In the end, Toby pulled a “Tanner’s calling me” to exit the conversation, but as we saw when he got into his truck and drove off, he really just didn’t feel like talking to Spencer anymore. Such a rookie move.

EMALIA(?) | As two couples struggle to stay together, a new one might also be blossoming in Rosewood. Talia made it crystal clear to Emily that when she asked about Ezra earlier — at which point Emily politely told her to “back off” — it was because she wanted to see Emily‘s reaction. As it turns out, Talia’s also a big ol’ lez and she’s “interested” in pursuing something with Emily. But here’s the question: Are you already crafting Emily-Talia tribute videos for YouTube, or are you hoping Paige comes to visit and reclaim her woman? 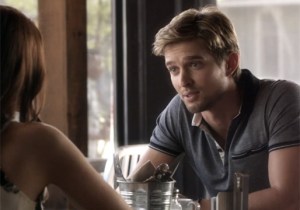 JASHLEY | This week’s episode also had plenty for you Jason-Ashley ‘shippers out there. After quitting her job with him, Ashley attempted to play the “I was lonely” card and wiggle away, but Jason wasn’t about to take it lying down — which, of course, was a pun, because that’s exactly how he wants to take it. Anyway, after another heart-t0-heart conversation about being sad and lonely and hot, Jason and Ashley shared a most wondrous kiss, which she abruptly ended out of guilt. Then again, that last shot of Ashley slipping off her engagement ring from Ted has me thinking there might still be hope for #Jashley yet!

PLL fans, are you pulling for Jason and Ashley? Worried about Aria and Ezra? Excited by the idea of Emily and Talia? Drop a comment with your thoughts and theories below.