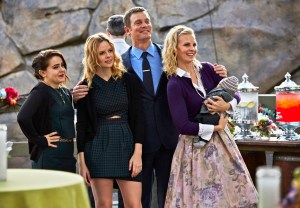 There are three certainties in life: death, taxes and the likelihood that Parenthood‘s series finale will make us weep.

Indeed, the Bravermans’ final hour is nearly upon us (Thursday, 10/9c), bringing with it a myriad of unanswered questions.

Will Crosby and Adam work out their Luncheonette issues? Is a happy ending in store for Joel and Julia? What will become of Zeek and his ailing heart? Exactly how many boxes of tissues should we have next to us on the couch?

TVLine caught up with Parenthood star Erika Christensen and scribe Sarah Watson for scoop on the looming series ender — plus, which major Joel/Julia moment wasn’t in the script? Read on…

YOU TAKE THE GOOD, YOU TAKE THE BAD | While many viewers are dreading the death of a major character, Watson clarified that the series finale isn’t entirely sad, nor is it entirely festive. “It continues with what the mood has always been: bittersweet,” she said. “That’s the best way to describe this show. They’re a family, they love each other and they come together. We’re going to see painful things and wonderful things.”

ONE BIG HAPPY FAMILY | Despite the absence of major characters from some of this season’s episodes — a contractual obligation that allowed for the final season to take place — Watson said the show’s producers “absolutely made sure” that the entire family would be together for the last episode. Added Christensen: “That’s something [the actors] really enjoy about this show. We’ve been anticipating that.”

PHOTOS Parenthood Turns 100: We Single Out Each Castmember’s Best Episode

BACK TO THE FUTURE | Though both ladies remained tight-lipped about the finale’s plot specifics, Christensen did reveal that a time jump of sorts allows viewers to”go further into the future at the end of the episode. You get to hit fast-forward on the family.” When asked if Joel/Julia fans would be satisfied by the time the credits roll, she added that the hour is “very eventful” for the newly reconciled pair.

Fun fact: Remember when Joel and Julia shared a sweet smooch on the ice skating rink back in Episode 11? That was actually a bit of improv on Sam Jaeger’s part. “It actually wasn’t scripted that they kiss,” Christensen shared. “Sam just felt that was the right thing to do in the moment. It was so sweet, and the kids’ reaction was just the icing on the cake.” Swoon!

PARTING SHOTS | Watson said she’s most excited for fans to see “the very last shot” of the episode, adding that the writers “figured out what the actual last image would be very early on.” And while Watson can’t yet know how viewers will respond to the final episode, she says she’s very pleased with the show’s conclusion. “As a writer, it felt like such a gift to drive toward something and not have to feel like you’re dangling some threads and tying other ones up,” she said. “It felt like a beautiful, perfect ending.”

What are your hopes for Parenthood‘s series ender? Click through our gallery below to see photos from the final episode, then hit the comments with your thoughts!