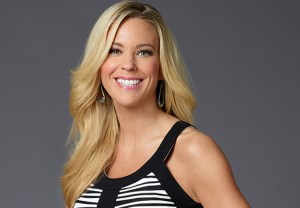 For the record, Kate Gosselin was just as blindsided by the results of Monday’s Celebrity Apprentice as you were.

“I couldn’t believe it,” Gosselin tells TVLine of her firing. “I’m not a sore loser, so I had a great experience, but I was genuinely shocked. I did not see that coming.”

Read on for our full Q&A with Gosselin, including her “no regrets” attitude and her thoughts on the villainous Kenya Moore.

TVLINE | I feel like most of the people watching from home assumed it would be Kenya. Do you think she should have been fired in your place?
I got a lot of that, as well [on Twitter]. It definitely was Kenya who should have gone. I played this game the way I would want someone who works for me to play it. But this is TV, so you can’t deny the ability of drama to get ratings. The drama that played out in front of us had something to do with it. It was what it was. In my real life, hard work, doing my job, working well with others and finding solutions without drama has never gotten me fired before. [Laughs]

TVLINE | Watching the show, especially the confessional interviews, were you surprised by anyone you thought you knew?
I have a good gut instinct about people and their motives, so I knew what people were like when we were filming. Still, it’s disappointing to see how low people will go, and how they’ll compromise who they are to get somewhere. I wouldn’t do anything differently. I have no regrets.

TVLINE | You came out looking good. Was it your goal to protect your image?
Well, my goal was definitely to win. [Laughs] Having said that, I went into it being who I am. In every project I do, I’m unwilling to compromise my values and morals and ethics. That’s very important to me. I knew I had to practice what I preach, because I’m preaching to my [eight!] kids. Don’t be the mean girl, work hard, take any job. It doesn’t make me feel good to be conniving and manipulative. I can’t do that. I’m of the belief that I’d rather outsmart and outwork people than doing it the ugly way.

TVLINE | Do you know who wins? If not, who could you see going all the way?
Watching him work, I think Geraldo [Rivera] definitely has what it takes. He’s very smart. Maybe he’s a few generations beyond his competitors, but he’s just so knowledgable and wise. Leeza [Gibbons] also definitely could win it. She’s smart and had a lot of great ideas and she definitely played the game well. She made friends with everybody.

Apprentice junkies, do you believe Gosselin deserved the boot, or should Moore — or perhaps another contestant — been let go instead? Drop a comment with your thoughts below.