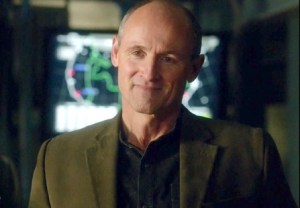 A creepy comic-book villain is making the leap from The CW to Fox.

The baddie — who was also portrayed by Michael Eklund (Bates Motel) on Arrow last season — has a zealotry bordering on madness, genius-level intellect and vast medical expertise. He pursues his demented research even as the bloody cost of his actions grows ever greater.

* Adam Scott will appear on Parks and Recreation costar Rashida Jones’ new TBS police procedural parody Angie Tribeca, EW.com reports. He guests as a doctor who crosses paths with Tribeca (Jones) while she awaits news on her partner’s condition.

* HBO has given a pilot order to True Blood creator Alan Ball’s classical music drama Virtuoso, Deadline reports. The Elton John-executive produced project is set against the complex and volatile backdrop of 18th century Vienna and follows a class of young musical prodigies from all over Europe at the prestigious Academy of Musical Excellence.