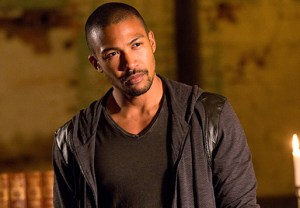 Monday’s The Originals (The CW, 8/7c) is taking viewers back — way back — to World War I to introduce another piece of the increasingly complicated puzzle that is Marcel Gerard.

“The episode is really about seeing Marcel as a present-day leader, then getting to understand how he became that way through flashbacks,” Charles Michael Davis explains to TVLine.

Those flashbacks — filmed “about two or three miles down the road [from The Originals‘ set] on a hill at a horse ranch” — come courtesy of werewolf bite-induced hallucinations, which Davis describes as both “cool” and “creepy.”

“You’ll get a lot of action scenes, but a different kind of action than we’ve had on the show,” he notes. “You won’t see any vamping or biting, but there are lots of explosions and airplanes — some really epic, film-quality shots.”

And it sounds like love — or lust, at the very least — could also be in the cards for Marcel as Season 2 marches on. 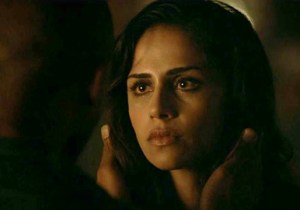 “He’s trapped in the Compound right now, so he can’t really get on Tinder or Match.com, but Gia might be a possible love interest,” Davis notes. “He likes her character and her strength, so maybe you’ll see something develop there. You never know.”

As for Freya — you know, that other new girl in town — Davis predicts Marcel’s interactions with the long-lost Mikaelson sister will be fairly limited.

“Any interactions he has with her would come if she threatens his plans, or tries to hurt any of the people he’s protecting,” Davis hypothesizes. “Or maybe she’ll be an ally, if her interests line up with his.”

Originals fans, do you approve of a Marcel-Gia romance? And what do you hope to see from Freya? Drop a comment with your thoughts below.