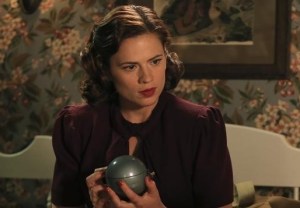 This Tuesday on Marvel’s Agent Carter (ABC, 9/8c), Howard Stark resurfaces — though as hinted in promos, it’s not entirely “Happy to see me” for him and Peggy.

During the series’ presentation at this month’s Television Critics Association press tour, an extended clip of Peggy railing at Howard in the episode “The Blitzkrieg Button” was shared, raising the question: What could possibly make Stark’s calm, cool covert operative so atypically emotional?

“There may be reasons why he reached out to her at the beginning that he was not entirely truthful about,” Agent Carter EP/Marvel TV head Jeph Loeb told TVLine after that screening. “What he really wants and what really happened that night [when Stark’s ‘bad babies’ were stolen], and what he’s been accused of, all comes to a boil.”

Especially when Peggy learns the true, close-to-home-hitting nature of one of Stark’s stolen-and-recovered gizmos. “A very big secret will come out,” Loeb teased.

That reveal — coming on the heels of the SSR (with Peggy’s help) having reclaimed Stark’s entire toy trove — will set the tone for the midseason drama’s final episodes. “James [D’Arcy, who plays Jarvis] was very accurate where he said [at TCA] that people probably watched the first two episodes and thought, ‘This is the Go Get the Gadget of the Week Show.’ And then we found all the gadgets,” Loeb noted. “So now what happens?”

As you form theories about the nature of Stark’s betrayal, watch this exclusive sneak peek of Tuesday’s opening scene: