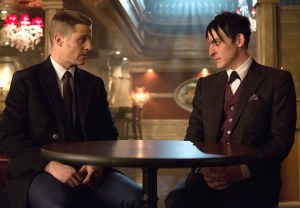 If you heard a groan echo through the canyons about midway through this episode, that was me reacting to Fish resurfacing at her club after Penguin had barely been able to kick the tires. Yes, it came on the heels of a triumphant moment for Butch, who rode to the boss lady’s rescue after managing his own escape from Falcone’s goons. And he and she then had that warm moment on a bed, as she caught her breath afterward. But Penguin was having such joy, impressing his kvelling mother with his new club, the visit from “friend” Jim Gordon… I hated to see the wind taken out of the guy’s sails. Worse, to see him then literally kiss Fish’s feet.

Luckily, Fish’s resurrection was short-lived, interrupted by Victor Zsasz and his mute molls. They peppered the place with bullets as Butch ushered da boss down the back hall and out a window, then literally took one for the team. I have no fear that Butch is still alive, to return another day — just as Fish will, having been secreted out of town at night by boat, after giving Bullock a goodbye kiss at the docks. “Always” what, hmm?

Meanwhile at the GCPD, Gordon and Bullock tackled two homicides — the second being a concerned citizen hoping to ID the killer of the first, but dispatched with an ice pick while at the cop shop. Gordon soon enough saw which way the dirty, corrupt wind was blowing — narcotics division douchebag Flass was behind the uptown drug trade and was covering his steps. Jim bumped up hard against the blue wall of silence, but after soliciting an assist from Penguin he was able to solidify his case with hard evidence. Alas, Jim later realized that Penguin’s “favor for a friend” did in fact come with a price, the knowledge that a drug mule’s wife and kids had been threatened — and that the contrite snitch believed Detective Gordon sanctioned the tactic.

Elsewhere in the hour: Edward Nygma continued to become more and more captivating (e-nygma-tic?), with his ardent, sweet (yet not aggressive) wooing of Kristen Kringle. Is the show ever so slowly laying the foundation for his inevitable “snap”/ascent into Riddler-dom? (Maybe if his lady love were to die at the wrong hands?) Also, Bruce got a message to Selina via mangy Ivy, and then gifted Miss Kyle with a snowglobe from his recent trip, only to see kitten wield her claws and hiss she was lying about seeing his parents’ killer, and that she wanted him to stop hassling her. Obviously, I think, Selina was leveraged into backtracking/giving the lad the brush-off, but we have yet to see who put her up to it, if that is the case.

What did you think of “Welcome Back, Jim Gordon”? One of the better post-hiatus episodes?