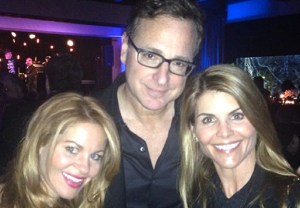 The cast of Full House seems to reunite on a bi-weekly basis at this point, yet we’re never any less excited when the gang decides to get back together.

There was even a sing-along of the Full House theme song, which Barber was kind enough to Instagram:

* Will Ferrell, Kevin Hart and Ariana Grande will appear on The Tonight Show Staring Jimmy Fallon on Feb. 1, following the Super Bowl.

* To celebrate the Academy of Country Music’s 50th anniversary, CBS is adding an extra half-hour to the ACM Awards, scheduled to air Sunday, April 19 at 8pm.