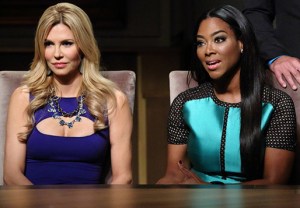 The first hour tasked Teams Infinity and Vortex with planning duel boat tours of New York City, and as even the most casual Apprentice viewers could have predicted, there was some serious drama on the high seas.

Despite Team Infinity’s initial setback — its original theme was Mardi Gras, an experience unique to New Orleans — a quick course correction by project manager Brandi Glanville saved the day. (No comment on Kenya Moore’s performance. It was a thing that happened, and now we can all move on.) As for Team Vortex, it could be argued that its biggest misstep was sexing up its tour with Hooters girls… but I’m pretty sure that Geraldo Rivera blurting out “Screw the terrorists!” was far more damaging.

With only eight contestants remaining — Moore was moved to Vortex to balance things out — the teams were asked to shift their collective focus towards the Trump National Doral, a massive hotel/golf course complex in Miami, Fla.

Under the flawless leadership of Ian Ziering, Team Infinity crushed its competition by crafting an interactive experience highlighting the best of Miami. Meanwhile, per Rivera’s suggestion, Team Vortex created a literal mascot for the Doral’s “Blue Monster,” but that was hardly Vortex’s greatest misstep; Moore brought her personal brand of crazy to the team, throwing Vivica A. Fox under the bus at every possible opportunity, and generally bringing Vortex’s vibe way down.

Unsurprisingly, Moore and Fox threw down in the boardroom. Phrases like “backstabbing” and, of course, accusations of bus-throwing flew fiercely over Rivera’s head. (Speaking of Rivera, how much of a pro is he? He might just make it to the big finale.) In the end, though, neither feuding contestant got the boot; it was project manager Kate Gosselin who was sent packing! I know, I can’t believe it either.

Time to sound off: Did Gosselin and Hansen deserve to be fired? Drop a comment with your thoughts below.