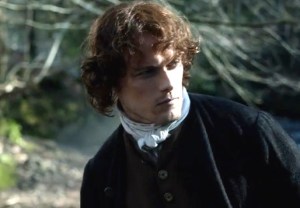 Claire takes a breather in Outlander‘s upcoming midseason premiere — and a sneak peek at the episode gives us Jamie’s take on events.

Starz aired the first minute of the hour — which bows Saturday, April 4 at 9/8c — before Black Sails‘ season premiere on Saturday.

“We’re restarting the audience, so we wanted to have a lead-in for the viewers that would shift the point of view,” executive producer Ron Moore recently told an audience at the Television Critics Association winter press tour in Pasadena. “This was a moment to pivot and include him in the perspective of the audience.”

That includes hearing Sam Heughan narrate the episode like Caitriona Balfe normally does; you can get a taste by pressing PLAY on the video below. Then make sure to hit the comments and let us know how Droughtlander is going for you.