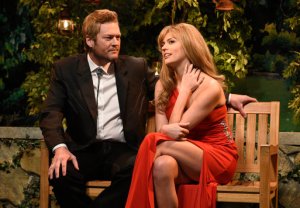 Blake Shelton has been the breakout comedic star of The Voice since its premiere in April 2011, and yet it’s taken ’til January 2015 for him to land a hosting gig on Saturday Night Live? (Whoever’s in charge of cross-promotional synergy at NBC has clearly been in a professional freefall since the demise of Law & Order: LA.)

Better late than never, though, I suppose. The country music star proved an absolutely terrific choice of emcee — scoring laughs in a wide range of scenarios and not relying on cue cards nearly as much as you’d expect for a neophyte. I’ll need a few days to digest the installment before I’m willing to rank Shelton at No. 1 on the list of hosts for the 2014-2015 season, but he’s definitely a contender.

Below, my picks for the night’s best and worst moments:

BEST: Magic Show Interrupted
Shelton was at his goofball best in the episode’s final sketch — playing a cantankerous audience member who, following an impressive card trick, begins making demands on Taran Killam’s exasperated magician. Just when I worried Shelton’s “Make me rich!” mantra was getting stale, he began a rapid-fire list of increasingly outrageous requests: “Give me indestructible bones!” “Guns for hands!” “Give me the power to go down on myself!” The last of those doozies led to Shelton gamely fumbling around behind the curtain, then — wish definitely not granted — triumphantly shouting, “He’s a fake!” Shelton, on the other hand, is the real deal.

HONORABLE MENTION: “My Darlin’ Joan”
I was ready to give the honors to the equally amusing “Wishin’ Boot” music video, but “My Darlin’ Joan” gets the edge because it was actually live. This one found Shelton as a musician who’d helped his 97-year-old recently widowed landlord put his feelings about his late wife to music — leading to a deeply uncomfortable segment on the Topeka Today morning show. Shelton’s musical earnestness was delectable — especially juxtaposed against crazy-dark stream-of-consciousness like, “My darlin’ Joan, I’d hide in the closet and read my Bible for strength/ My darlin’ Joan, our dinners were silent and we never had sex.”

WORST: Celebrity Family Feud
On paper, this face-off between the judges from The Voice and American Idol should’ve been a comedic slam-dunk — but the execution was downright baffling. Beck Bennett’s Harry Connick Jr. impersonation was a White Castle burger in a back-alley dumpster trying to pass itself off as filet mignon at Morton’s. Meanwhile, the show’s writers inexplicably skewered prior Idol panelists Nicki Minaj and Steven Tyler — even though Sasheer Zamata and Kyle Mooney brought almost nothing to the characters — and missed their chance at more current targets Jennifer Lopez and Ryan Seacrest. OK, Kenan Thompson scored a couple laughs as host Steve Harvey — and the final Blake Shelton-Adam Levine romantic awakening was amusing — but this was one of the bigger missed opportunities in recent SNL history.

WORST: Parole Board Hearing
Kenan Thompson hammed it up as a cannibalistic sociopath known as The Texas Man-Gobbler, who made new-age-y, quasi-spiritual pleas for lenience (with swelling music behind him) despite the abject disgust of the panel in front of him. If there was a single laugh to be found in this sketch, feel free to explain it down in the comments.

What did you think of Blake Shelton’s SNL hosting gig? Take our poll below, then sound off in the comments!