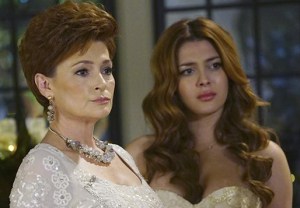 Sunday’s Revenge saw the arrival — in the flesh, this time — of Carolyn Hennesy‘s wickedly enjoyable Penelope Ellis, and Hennesy tells TVLine she still has plenty of poison left to spill.

“She’s s even more of a monster in real life [than in Louise’s hallucinations],” Hennesy says. “She’s a delightful southern pecan praline with a worm in the middle. My basis was Olivia de Havilland as Miriam in Hush…Hush, Sweet Charlotte. She’s nothing but sweetness and pearls and concern when there’s someone in the room other than her daughter, but when she’s alone with Louise, she’s nothing but an impaling pole.”

Read on for Hennesy’s full Q&A, previewing Penelope’s rough encounters with Emily and Nolan, as well as her potential long-term plan.

TVLINE | I’ve got to be honest, this character feels like it was written for you.
Charm-with-fangs is a great thing for me to play. You smile big, but the sharpened molars are dripping poison. I don’t know if it’s good or bad, but that just seems to be a specialty of mine. It’s not only in my wheelhouse — it is my wheelhouse. As they say, the snake gets the best shoes and the best lines.

TVLINE | And I assume there’s more to be learned about the Ellis’ history?
There will be, yes. There are other atomic bombs to be dropped in Louise’s life. 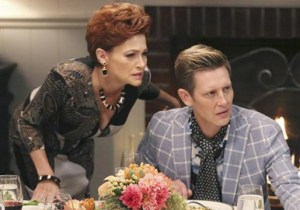 TVLINE | And what’s Penelope’s relationship with Nolan? She clearly sees through the sham.
It’s very antagonistic. Nolan understands exactly who she is, so he hates her, and rightfully so. He really is Louise’s knight in shining armor, and now that they’ve gotten control of the money from Penelope, we’re left wondering what lengths she’ll go to to get it back. It’s all about the money.

TVLINE | Sunday’s episode description says Emily will help Louise with the “skeletons in her closet.” Can we expect an Emily-Penelope face-off?
[Laughs] There is, indeed, a face-off. There’s a wonderful roundtable dinner scene where I get to work with my favorite child, with Lyman, who’s really going places — as opposed to Louise, who’s just going straight to hell.

TVLINE | Now that she’s got herself a place in the Hamptons, how long can we expect her to stick around? Maybe… forever?
I want her there forever, too! It has thus far been a five-episode arc, of which we’ve seen four. Five comes up on Sunday, so we’ll see. Whatever happens, if it doesn’t go Penelope’s way, I’m hoping she doesn’t take it lying down. She’s capable of much more than we’ve even seen.

Revenge fans, are you hoping for more Penelope in the future? What’s your take on all the Ellis family drama, anyway? Drop a comment with your thoughts below.