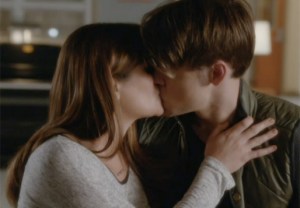 Friday’s Glee was a veritable ‘shipping delight for those invested in “Klaine” and “Samchel” — depending, of course, on which sides of those ‘ships you sail.

For example, if you find the concept of Sam and Rachel to be utterly revolting, there’s a good chance you’re still cleaning up the mess from your hour-long projectile vomit sesh. But if you’re all for Rachel testing the waters with Mr. Evans, this week’s Glee — from the duo’s performance of “A Thousand Miles” to that gasp-worthy lip lock — probably went down real smooth.

Of course, the fact that Sam was under Sue’s hypnotic orders to seduce Rachel — and the fact that Sam ultimately turned down Rachel’s coffee date invitation, due to his lingering feelings for Mercedes — took the wind out of Samchel’s sails before it even got a chance to leave the dock.

Oh well, it was fun while it lasted… 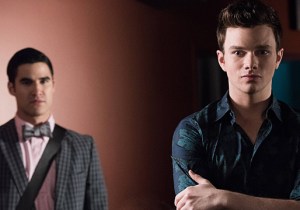 OPERATION: KLAINE | But making Samchel happen wasn’t really Sue’s main objective this week. In the episode’s opening moments, she revealed herself to be the most rabid Klaine ‘shipper of all time; she’s apparently been devastated ever since their split. What she wants more than anything, she explained, is to see her two favorite blouses reunite once and for all, mostly so she can attend their “fabulous” gay wedding. What’s a “blouse,” you ask? Let’s peek into Sylvester’s Dictionary:

Blouse (noun): a breezy, femmy top; Sue Sylvester’s favorite type of gay; incapable of sneaking up on someone because, for miles, you can hear their gentle *swish, swish, swish* on the summer wind.

The first step in Sue’s plan was to separate Blaine and Karofsky, and by God, she pulled out all the stops: She placed a literal bear in their bed, arranged for all of Karofsky’s bearded exes to dine at the same restaurant and even (somehow) proved that they’re related. But just when Blaine appeared ready to call it quits, Kurt assured him that Sue fabricated the whole “third cousins” thing. (Side note: “Why can’t she and everyone else understand that … we’re better off as great friends?” might be the trolliest line in Glee history. I loved it.) 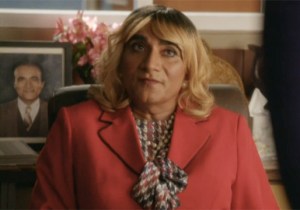 WHAT THE FORK? | And then there was Sue’s other crazy plan to destroy Will Schuester. Just when the former rivals were starting to form a friendship — or the closest thing to a friendship that can exist between them — Will did something so heinous, so unspeakable, that it set Sue back on the warpath. That’s right… he didn’t throw away his plastic fork after lunch. He just left it on the table, devil may care. Is it any wonder why Sue vowed revenge?! She even enlisted the help of Carmel High School’s principal — who, as it turns out, is Figgins’ identical sister Abigail Figgins-Gunderson (pictured) — to try to get him fired. There is truly no limit to her ruthlessness.

OK, it’s honesty time: What did you think of the Rachel-Sam pairing? How long until Kurt and Blaine give this up and get back together? Drop a comment with your review of the episode below.