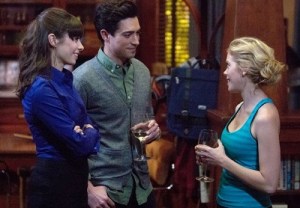 Those hoping for some resolution as to what happens after A to Z‘s central couple is done dating will have to keep on hoping.

Thursday’s de facto series finale, “M Is for Meant to Be,” found Andrew and Zelda pondering their own future when his seemingly perfect ex-girlfriend Madeline (Dreama Walker, Don’t Trust the B—- in Apt. 23) arrives in town following a breakup.

Zelda is convinced the gal is there to win back Andrew, so she sets up Madeline with her own ex. After convincing Andrew she just came for his support, Madeline reveals to Zelda that she really was there to get him back. After all, when they first met, Andrew told her it was meant to be, the same line he gave Zelda on their first date.

Andrew tries to convince Zelda he was being sincere with her, but she just replies, “Until you really mean it with the next girl.” He can’t guarantee they’ll be together forever, he tells her, and this makes Zelda’s decision about a partnership offer (from executive producer Rashida Jones, finally putting in an appearance) in New York all the easier. (What if this is actually a prequel to How I Met Your Mother?)

“This job is a sure thing and I don’t want to turn it down for something that isn’t,” she says.

But when she looks out the window of her New York office and sees a stranger sitting at a desk in the next building, she decides she doesn’t like the view.

Meanwhile, Andrew leaves her a voicemail, admitting maybe there’s no such thing as meant-to-be. “I don’t care because I want to be with you,” he adds as Zelda shows up in her silver dress.

So what happens next? Stephie gives them four months, Stu thinks they’ll get married and we’ll just have to wonder in frustration.

What did you think of the A to Z finale? Were you hoping for more answers?