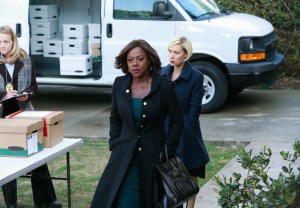 Poor, beleaguered Annalise Keating. Even in death, her lecherous hubby Sam is still causing her all kinds of grief.

That seems to be the crux of several new photos ABC has released from the 2015 premiere of How to Get Away With Murder (Jan. 29, 10/9c) — as the hard-charging defense attorney arrives home to find police officers carting away file boxes while her law-student helpers stand by helplessly. Could it all be related to Sam’s reported “disappearance”? Or is it possible his bludgeoned and burnt corpse turned up in some Philadelphia-area landfill?

In other images from “Hello Raskolnikov,” we see several of the freshman drama’s romantically entangled duos — Asher and Bonnie, Frank and Laurel, Nate and Annalise — in various states of uncomfortable conversation.

The network’s official description for the hour reads as follows: “It’s the day after Sam’s murder and the students are called in to help Annalise find her missing husband, but just how much does Annalise know? And when a surprise visitor shows up in town, getting away with this murder might not be as easy as the students had hoped.”

Click through the gallery below for a first look at the action, then hit the comments with your own theories about what’s occurin’!