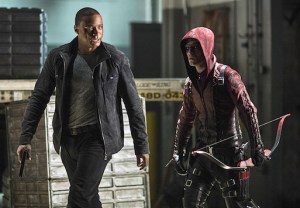 This week on The CW’s Arrow, the rest of Oliver’s team tried (hard) not to fear the worst about his duel with Ra’s al Ghul, a new threat emerged in the Glades and Laurel suited up.

So, you have your answer. After six weeks plus 58 minutes of waiting, it was revealed that Oliver Queen was rescued from the ravine ledge on which he landed, bleeding to death, by Maseo. The League member then delivered his mostly dead friend to the care of wife Tatsu, who (somehow) brought him back to life.

Maseo did this — presumably defying Ra’s al Ghul’s wishes — because he owed a life debt to Oliver, who, it was revealed in flashbacks, once irked boss lady Amanda Waller by letting a Triad thug go free, so that the GPS device Oliver planted on the guy would lead them to Tatsu, who had been taken by China White.

Back in Starling City, however, Team Arrow struggled with the news (or lack thereof) about Oliver. Felicity, more than anyone, kept a stiff upper lip, maintaining, “Nothing has changed,” that they should continue the good fight. But when Malcolm makes a whirlwind trip to the sacred site of the trial by combat and returns with Oliver’s blood on Ra’s al Ghul’s scimitar, their mission becomes less clear, muddied by emotion.

As Roy put it to Diggle, what’s the point in “doing all of this without him, without him,” seeing as it seems Oliver will never come back? Distracting the team, for a bit, is Diggle’s realization that a series of numbers found at the site of a gang execution carried out by rising crime star Danny “Brick” Brickwell matches up with the evidence files tied to all the bad guys Team Arrow had put away since the Slade Wilson days. Meaning, Brick is poised to undo all of their hard, heroic work.

Felicity, rocked by the likelihood of Oliver’s death, vents to Ray, in the form of deriding his plan to save the city using the A.T.O.M. exosuit. “It won’t work…. It won’t bring your fiancée back,” she roars. “Nothing we can do will bring [dead loved ones] back.” Ray hears out her point, then warns: “Never tell me what Anna would have wanted.”

With Felicity still in a bit of a daze but running the comms, Diggle and Roy set out to stop Brick’s gang from seizing the police files. They get their licks in, and Roy saves Diggle from being done in by Brick, but Brick and others still steal away with the files — in part because Felicity shut the warehouse doors in front of Roy and Diggle. “I chose not to let anyone else I care about die,” she explains, before finally giving up on doing “this” while Oliver lays dead somewhere. “You don’t get it — there is no ‘this’ without him. I’m done.”

Felicity apologizes to Ray, explaining (in part) her loss: “I’m not sure what we were, but he’s gone…. I’m 25 years old. I’m over my quota” of dead friends. And while she won’t stop Ray’s A.T.O.M. plan, “I don’t have to help you,” so she quits that gig, too. Meanwhile, Diggle laments to Laurel that Brick undid eight months’ worth of Team Arrow work in eight minutes. Having heard the latest on Oliver, Laurel asks, “Are you coming back?” “I dunno,” Diggle shrugs. “For the first time since meeting Oliver Queen, I don’t know what happens next. I still think of myself as his bodyguard, and I couldn’t protect him.” And as he walks away, Laurel eyes the Canary gear….

Surprising Thea at her loft, Malcolm warns that they are now in danger and must get out of town. Elsewhere, after Brick rallies his troops — i.e. the dozens of fellas Team Arrow had gotten locked up — Laurel-as-Canary gets the jump on two of them to deliver “the justice you can’t run from!”

ARROW POINTS:
* “This suit is too tight.”
* “I wouldn’t recommend texting during a real fight.”
* Anyone else thinking Thea’s blunt, fierce ‘do was the result of a sword fight mishap with Malcolm?
* “You make it sound like using an enhanced exoskeleton to fight crime and save the city is a Looney Tunes idea.”
* “I could have killed you!” “It’s cute that you think so.”