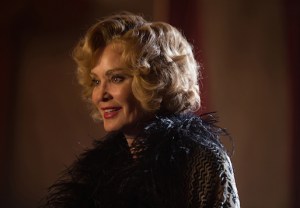 As “Curtain Call” brought American Horror Story: Freak Show to a close, Dandy at last made his stage “debut,” and Elsa arrived in the one place in the world that might actually be weirder than her own Cabinet of Curiosities: Hollywood.

Here’s how it all fell apart and came together.

THE BEGINNING OF THE END | As the finale kicked off, Dandy was pitching a fit over the fact that, just like Penny predicted, audiences weren’t lining up to see a “rich Nancy sing show tunes.” And, in no time, he’d become so intolerable that he’d been decked by Amazon Eve, and Paul had quit the show on everyone’s behalf. What’s more, the Illustrated Seal called Dandy the worst thing he possibly could — boring — and added that, no matter what, he’d never be one of them. “We don’t trade in boring,” he spat. “We’re freaks.”

ALL FALL DOWN | Shortly thereafter, Dandy cheerfully prepared for showtime. Mind you, for him, showtime meant gunning down Paul, Toulouse, Legless Suzi, Ima and more, and humming all the while. Brave Amazon Eve hurled herself at the psycho, and for a minute, it looked like she was going to be able to handle him. But, after he shot her in the leg, she was done for. So by the time Jimmy arrived on the scene that evening, it appeared that only Desiree (who’d hidden during the massacre) had survived.

TILL DEATH DO US PART | Given a choice between a bullet between the eyes and a ring on her finger, Bette — gasp! — tied the knot with Dandy. Luckily, theirs wouldn’t be a long marriage, as the “maid” that the bride and Dot had hired was none other than Desiree. After she drugged the groom, the Tattlers revealed that they had duped him. “Bette Davis couldn’t have given a more convincing performance” than Bette did, Dot hissed. As Dandy slipped into unconsciousness, Jimmy told him that he was “finally gonna be a part of the show.”

A SINKING FEELING | When Dandy awakened chained in Houdini’s famous escape tank, he begged Bette to release him. But even she couldn’t muster up mercy for her friends’ killer. “I hate you!” she yelled. Then, the Tattlers, Desiree and Jimmy (who managed to find an excuse to say that the freaks shall inherit the Earth) sat back and watched the villain drown. And, though it’s the last thing that Dandy deserved, annoying bastard that he was, he won raves for his “performance.” “That boy is a star,” Desiree declared.

A STAR IS REBORN | Meanwhile, in Hollywood, Elsa paid repeated — futile — visits to the office of the president of the WBN network. When one evening the front-desk receptionist cattily suggested that the wannabe TV star change her act, because “Marlene did it better,” Fraulein Mars lost it and slapped her. During the ensuing fracas, Michael Beck (Neil Patrick Harris’ hubby, David Burtka) — the junior veep of casting — happened upon the scene and took pity on the chanteuse.

ACT II | As Elsa knew he would, Edward Mordrake appeared while she was singing (Bowie’s “Heroes,” to be exact). However, while he did stab her, “Your place is not with us,” he revealed. Instead, she was sent to an afterlife replica of the freak show at which she was joyfully reunited with Ethel, Ma Petite and her whole family. When Else asked whether she’d have to pay for her sins, Ethel replied in the negative: Like Elsa had always said, stars never pay.

ALL’S WELL THAT ENDS WELL | Thankfully, it wasn’t only Elsa who got a happy ending. While she was giving her last performance on TV, Desiree caught a few seconds of it as she passed a storefront with Angus and their kids, and Jimmy (briefly) tuned in in the suburban home that he shared with a happily pregnant Dot and Bette.

Okay, your turn. What did you think of the episode? The season? When Edward Mordrake told Elsa that her place wasn’t with him, didn’t you think she was going to be reincarnated as Sister Jude at Briarcliff Manor? Grade the season finale via the poll below, then hit the comments to back up your choice!