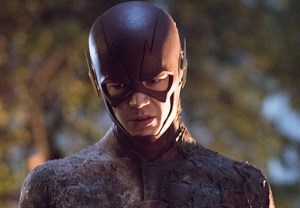 This week on The CW’s The Flash, as Central City weathered both a nasty cold front and a gnarly heat wave, the scarlet speedster (as well as Cisco) lent a helping hand. Meanwhile, Caitlin made a curious discovery about her “dead” fiance’s new name.

“Revenge of the Rogues,” perhaps more than any episode to date, played like a live-action comic book – which is a good, good thing. As previously chronicled on these pages, I’ve always been a fan of the comics’ Captain Cold, so every moment in which Wentworth Miller let loose with the cold gun was pure joy.

And because I’m also a Prison Break superfan, having Dominic Purcell grunting through his role as Cold’s frenemy Heat Wave was like peanut butter and chocolate.

To recap: The episode opened on a quiet note, as Iris prepared to move out of her childhood home and in with Eddie – this despite Barry having just poured his heart out to her. But then we dive into the action, as Cold and Heat tried (yet failed) to lure The Flash to a routine car theft. Instead, they realized, they must target someone close to him.

Upon realizing that Captain Cold is back in the mix, Barry struggled with his “priorities” – settle an old score and possibly endanger civilians, as he did during their first row? Or focus, at Dr. Wells’ urging, on his training, and leave the S.T.A.R. Labs team to help the police (with cold-resistant shields)? Barry let himself to be persuaded to 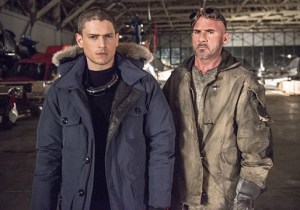 choose the first path, but when Snart showed up with his hot-headed friend and roasts the CCPD, he realized the error of his ways.

Back at S.T.A.R. Labs, as Caitlin searched for info on the “Firestorm” that Ronnie mentioned when last she saw him, Barry shares an update on his sad Iris sitch. Their convo triggers Barry to suggest that Firestorm is possibly acronym — and a remarkably unwieldy one it is! Caitlin follows up on the research paper she dug up, and learns that a Professor Martin Stein (to be played by Spy Daddy Victor Garber) had his F.I.R.E.S.T.O.R.M. project abruptly shut down and commandeered by the Army, after which the prof vanished.

After Caitlin is kidnapped by IcyHot on her way back from the university, The Flash – thanks to some Ghostbusters-like advice from Cisco and a heroic move by Eddie – successfully baited the villains into “crossing streams,” thus cancelling out each of their terrorizing toys.

With that bit of business behind him, Barry helped Iris with her final boxes, after which they discussed the awkwardness between them. Barry said that (irony alert!) he could “see into the future,” and what he saw was a happy Iris and Eddie, and he and she back to being besties. Later, sharing a beer with Joe, Barry decided to move back into the West home – if only because his neighbors are getting a wee bit suspicious about his whoosh!ing in and out.

But Cold and Heat aren’t down for the count. Rather, a prison break of sorts was part of Snart’s plan, as their transport van is intercepted and they are freed… by Snart’s (unseen) sister, to be played by The Tomorrow People‘s Peyton List.

IN A FLASH:
* Was Dr. Wells about to rise from his wheelchair and save Barry, during the training session with the drone? Also: LOL at Barry’s pile of consumed Big Belly Burgers!
* Spy the Space Ghost comic book in Barry’s (red-and-yellow) school backpack?
* Hartley Rathaway aka the art buyers’ son = Pied Piper.
* Eddie telling Joe he can swing by, provided he call first. “Or not. Whatever!”
* As enjoyable as Cisco’s naming of baddies is, it was really nice to see him get a serious-ish moment in the sun this week, making his case for the CCPD to use S.T.A.R. Labs tech and take a big step toward earning back the city’s trust.

What did you think of the episode “Revenge of the Rogues”?