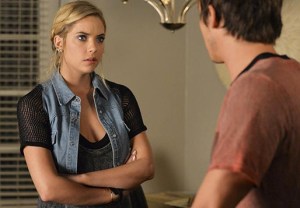 Neither “pickled” nor “dissolved” are very flattering adjectives to describe your friend, but considering Mona’s current state, I’m thinking she’s in no position to complain.

A mysterious text from the late Ms. Vanderwaal’s phone on Tuesday’s Pretty Little Liars directed Spencer and Caleb to a storage unit facility where they believe her body is being kept. Their original assumption was that the unit was co-owned by Alison and Detective Holbrook — Jason basically confirmed his sister’s connection to the shady law enforcer, as if the girls needed more proof — but they were shocked to discover who the unit is really registered to: Hanna!

To make matters worse, Spencer told Toby she couldn’t share what she and Caleb were up to, which nearly triggered another tearjerking fight. Forget the girls; I think she would be more concerned about “Spoby” surviving this ordeal.

Elsewhere in Rosewood this week…

NEAT FREAK | I have a lot of questions about Talia, the new employee at Ezra’s café, but I’ll try to limit myself to two: First of all, is she insane? Her obsessive attention to detail drove Emily bananas this week, and I can’t say I blame her, especially after Talia’s dig at the tiny hole in Emily’s t-shirt. Second question: Where does she stand, you know, sexually? My lesbian Spidey sense was tingling for the entire episode, and I was completely thrown for a loop when she started talking to Emily about Ezra’s “cute buns.” For now, I’ll just assume “A” planted Talia at Ezra’s café to ruin as many lives as possible, gender be damned.

INDECENT PROPOSAL | Am I the only person who completely forgot about Pastor Ted? I was pretty pumped when Ashley and Jason hooked up last week, but upon Ted’s return — and especially after he revealed his plan to propose — I suddenly feel icky about the whole thing. Hanna’s mom is also clearly not in a good place, because she practically fell apart when Ted popped the question over a ginormous peanut butter cookie. At this point, I’m hoping Ashley sees the light and decides to marry Ted; it’s been way too long since we’ve had a wedding on this show, and Ashley would make a beautiful bride.

PLL fans, do you think Mona’s body is really in that barrel? And should Ashley say “yes” to Ted? Drop a comment with your thoughts and theories below.