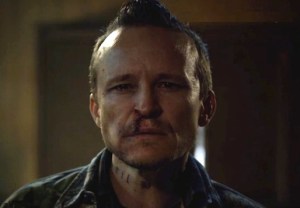 As FX’s Justified opened its final season with a tense hour that pitted Raylan against a federale, had Ava on edge and saw Boyd pull off a brazen bank heist, almost everyone made it out alive.

Because in the course of the aforementioned heist, Dewey Crowe was used as a distraction, to draw Raylan and Tim off Boyd’s scent. After Dewey grumbled some about his fate as bait, and with Boyd wary of the parolee’s trustworthiness, he received as recompense a bullet in the back of his head, as he studied an old photograph of Boyd’s coal miner kinfolk.

TVLine asked Justified showrunner Graham Yost about pulling the trigger on the delightfully dim-witted, delusional Dewey, who has been played off and on by Damon Herriman since the pilot, as well as the premiere’s final, unsettling scene.

TVLINE | No joke, you made me jump out of my seat when Dewey died. I mean, I was looking intently at the photograph with him,  looking in their eyes like Boyd told me to, and then bam! Talk about that decision to kill off Dewey.
That was up there with the hardest decisions we’ve made on the show. Killing off Dewey was just about as hard as killing off Arlo. Dewey had become the odd comic heart of the series, and I think it was because of that that we felt that [his death] would have this impact and establish how serious this all is for Boyd, that he kills someone who he even remotely suspects might be working for the other side.

I mean, when we took out Arlo in Season 4, it was with the feeling that there’s only so many seasons left, and we’re not going to have everything happen in the last year, and we won’t have everything happen in the last few episodes. So, if Dewey was to go, it was sort of better to do it now. But it was really hard, and not least of which because we just love Damon Herriman. He’s a great guy, and he’s been so much fun to work with. Just the way he did Dewey…. We would write stuff that on the page was hilarious, and he would play it straight and absolutely earnest, and it would become heartbreaking, even funnier… and slightly scary.

TVLINE | He lived in this wonderful little reality, you know? He’s like, “You can’t touch me, Trooper. I’m Teflon!”
I know. And his mangling of words became so much fun because he says it with such confidence. It was tough, because we had to tell Damon when we were doing DVD commentary on Season 5. Before we go in, we’re all smiley, and he said, “So, what have we got planned for Dewey [in Season 6]?” We go, “Oh, we’re talking about things.” We didn’t want to tell him. And then we came out, and we said, “Look, Damon… we’ve got bad news. Dewey’s going to die.” He said, “Oh no, oh no, no, no. When, when?” And he’s thinking halfway through the season. “Well, in the first episode.” He was so upset, because he fell in love with Dewey as well. But when he read the episode, he said, “You’re right, it’s time.” He liked that we gave him as much fun as we could in that episode — but that was a heartbreaker, you know? 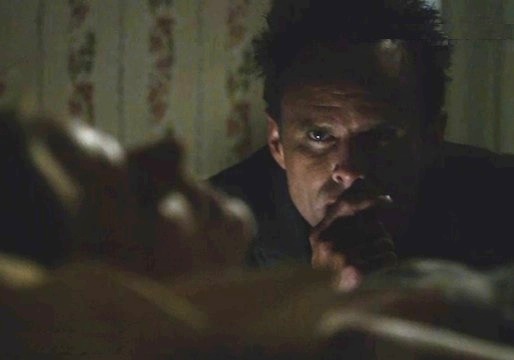 TVLINE | Also, give me some idea of what’s going on in Boyd’s mind as he’s sitting there at sleeping Ava’s bedside.
We have no idea. Honestly, there are times where we just throw something and say, “Let it play off of what Walton [Goggins]’s doing.” I’m open to interpretation. Is he suspecting her? Is he just happy to see her? Is he trying to look over her? Is he wondering about her?

TVLINE | Because when I saw that in the Season 6 trailer, I assumed it was, like, an Episode 3 moment. That maybe she will have done something to make him suspicious….
Yeah. No, listen, that [scene] was in. It was out. It was in. It was out, and then we just decided, you know what? It’s a strong, dramatic conclusion, and we walk back from it to a certain extent, in that there’s a truth about Boyd that Raylan says to Ava in the fifth episode: “Boyd’s ego was such that he would kill three of his own men before he would suspect Ava,” because he could not believe that Ava would betray him. And so that’s ultimately where we land on that, which is he may be questioning it, but he’s not going to act on it, or be vocal about it, or ask any questions, really. He can’t really deal with the reality of that possibility, but there’s an exchange in the second episode, between him and Katherine (played by Mary Steenburgen), where you realize that he’s defensive about it, and defensive usually indicates a vulnerability. So it’s there. He just doesn’t want to bring it front of mind.