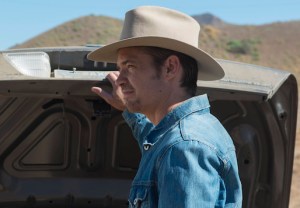 Justified has one final round left in the chamber. And you can bet that it will hit the bull’s-eye.

This Tuesday at 10/9c, the FX drama opens its sixth and final season, picking up right where things left off with Raylan (played by Timothy Olyphant) recruiting Ava (Joelle Carter) as a C.I. to take down her estranged fiance Boyd (Walton Goggins) on RICO charges. When all is said and done, will Raylan get his man, once and for all? Will anyone in Harlan find a happy ending?

Showrunner Graham Yost spoke with TVLine about the final season’s themes, Ava’s internal struggle, the guest star that had his cast clamoring for more and a series finale that’s not entirely “neat.”

TVLINE | In these first few episodes, I saw three people trying to move on, each for the best of reasons, but they’re all having a dickens of a time doing it. Is that a theme for the final season?
As always, a couple themes emerge early, and then other themes develop along the way. But one of them from the chomp was the notion of “One last thing before I go,” that classic setup in crime movies where the bad guy says, “One more big job, and then we’re done” — and that rarely goes well. But in our case, [in addition to Boyd] it’s also “one more thing” for Raylan, one more big job for him, and then he can [join Winona and their baby in Florida] — and that seldom goes well either. The other theme is just simply trust and betrayal, and the horrible situation that Ava is in…

TVLINE | Asking herself, “What is the right thing to do?”
Yeah. We felt that the whole reason for last season was to set that up, to put Ava in a place, to put Raylan and Boyd at loggerheads again. That gave us an interesting place to go that really brought it back to our three central characters.

TVLINE | Being the final season and with that undercurrent of Raylan and Boyd at loggerheads, are you carefully parsing out their scenes together? Might we not get a big showdown until the end?
You know, it’s funny. We felt, even when starting Season 4, that we had to limit the amount of times they came together because we’d done it so many times that we didn’t know how we could do it in a fresh way. And it was originally our plan that they wouldn’t have much together in this season until towards the end. But as it materialized, there’s a scene here and a scene there…. They cross in an early episode, and it was a good scene. The thing is, they’re so wonderful together, Tim and Walton, and those characters really spark off each other, that we don’t want to overdo it, but we found instances where it feels reasonable for them to be coming up against each other without it having to be a “fatal showdown.”

TVLINE | How would you sum up Ava’s internal debate?
She fell in love with Boyd and enjoyed the idea of being this Bonnie to his Clyde, especially if they were heading toward something a little more respectable in the Harlan world. 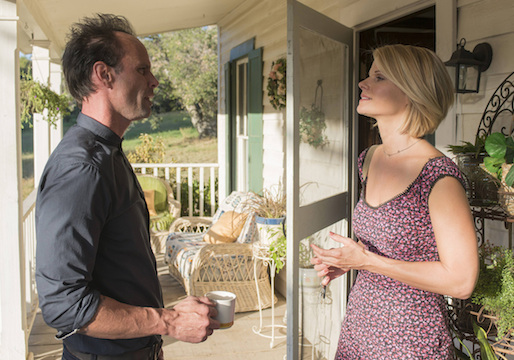 But she also knows that he made a choice last season to protect himself, and he didn’t try and get her out of prison. That when Raylan gave him an opportunity to ask for anything, he didn’t ask for that. Now, Boyd could argue that Ava said, “I don’t want to see you anymore,” so they weren’t together at that point, but…. And she’ll always have great affection for Raylan, even though from Season 2 and 3 on he has been pretty harsh with her. But he’s the reason that she’s out of jail. So she’s in a real jackpot, and that’s always fun to write, especially when you have Joelle Carter playing the part. I was just remarking to her, having watched, at that point, the first four episodes or so, what a great job she’s doing this season, and it’s a little bit like saying to someone, “Boy, you’ve really lost weight.” But it’s just that now there’s so much focus on Ava being in the fulcrum that it’s really fun to see her work.

TVLINE | I love the moment you give her and Raylan in the premiere, with that callback to their first scene in the pilot…. It was very cool.
Oh, thanks. I think it was a combination of the three writers on the project working with Tim. So there was, I think, a lot of [Chris] Provenzano in that scene, but also Fred [Golan] and Michael [Dinner].

TVLINE | Now, I had assumed over the summer/fall that Boyd’s bank heist would be the big series-ending set piece, but it appears that’s not necessarily the case.
It’s like when you do a movie called Twister, there better be a twister early on, and then some twisters in the middle, and then a really big twister at the end. We’re going to upset that structure a bit, as you can see from that first episode…. So there will be other things coming down the pike.

TVLINE | Sam Elliott and Garrett Dillahunt (Deadwood) are your big guest stars, at least during this early stretch of episodes. How would you describe their characters?
One of the problems with casting Sam Elliott is that when you see him in the second episode, you go, “OK, now we’ve seen Sam Elliott, and we know that he’s going to play a larger part than just this scene and just this relationship.” So there are a lot of surprises in the third episode when you realize fully what he’s doing there and who he is and everything. However, when you get Sam Elliott, you’re getting just gold. It’s one of those things where everyone wanted more. Joelle and Walton [Goggins] did a big scene with him in [Episode] 3, and afterward they’re just sort of rubbing their hands, saying, “Give us as much as you can with Sam.” And then when Tim 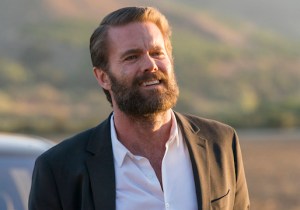 got to do a big scene in Episode 4, he was just smiling ear to ear. It was just so much fun because you get this great actor who has this iconic image….

TVLINE | Within this genre, too.
Yes, but usually not as a bad guy, so getting him to play the dark side of that image has really been fun, and he’s really embraced it. And Garrett, we knew that we wanted some big, obvious threat to Raylan, to Boyd, to the whole situation, and so we thought about Garrett. Tim worked with him on Deadwood, and we were all huge fans of his from, well, everything, but specifically Winter’s Bone, which always felt like a cinematic equivalent to the same sort of fields that we’re toiling in. So, when he was interested, we just jumped at it and created the part for him. We realized that we wanted to introduce him in an offhand way in the first episode, and then you see him in a different light in the second and on.

TVLINE | How would you possibly tease the series finale? Is it going to be big on emotion, big on action, big on everything?
Yes. That’s the goal. Action, emotion, everything. And we don’t want it to be too neat, and we don’t want to leave too many ends dangling when it comes down to the central relationships. We need to resolve things to a degree, but when people ask me what it’s going to be, I say very honestly that we haven’t broken that episode yet. So we don’t know exactly. [Ed. Note: As recently as this past Sunday, Yost maintained, “We absolutely don’t know exactly how this is going to end yet.”] We have some ideas, but it’s been changing week by week for the past three years. Listen, I’m someone who from the first episode thought, “How is this thing going to end?” So it has evolved over the years, but I would say the only thing is that the most important thing is that we remain true to Elmore Leonard and how he ended his story and the tone he tried to hit. It’s a very specific tone, and that’s our goal.

TVLINE | Do you at least at this moment know your very final image?
Not entirely. We’ve got ideas for the last act of the series, the last 10 minutes, but we’ll see when we get there. Stuff can seem great until you get it up on the board, and then it can all fall apart, and then you build something new, and you got to use bits of what you had. It’ll all become apparent as we go.