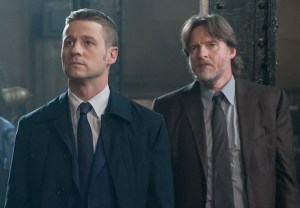 “What goes down must come up” — while not at all true, per physics — could describe the trajectory of Gotham episodes, seeing as the Fox drama again rebounded from a lackluster episode (last week’s  trip to the loony bin) with an hour that actually moved plot along.

In “What The Little Bird Told Him,” Jim Gordon angled to get his detective’s badge back by promising Commissioner Loeb (an impressively steely Peter Scolari) that he’d track down Arkham escapee Jack Gruber né Buchinsky aka “The Electrocutioner” within 24 hours. Though Jim had no plan in place to do so — much to partner Harvey’s amazement/amusement — he soon enough deduced that Buchinsky had an axe to grind with Don Maroni.

So, after Maroni’s crew got zapped by one of Buchinsky’s stooges, Jim convinced the crime boss to accept protective custody at the GCDP, as “bait.” Sure ’nuff, The Electrocutioner 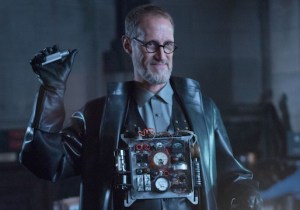 showed up and KO’d everyone in the cop shop… save for Jim, who had taken Edward’s advice to wear his rubbers. (Alas, Jim then neutered the brilliant Electrocutioner with a splash of coffee. Cheat.)

Elsewhere within that A-story, Edward offered workplace crush Kristen Kringle a riddle in the form of a cupcake with a bullet inside it, only to get written off as “weird” — a word that visibly upsets him — while Jim wrapped his long, hard day by finding Dr. Leslie “Please, Call me Lee” Thompkins waiting for him outside the locker room shower. They wasted no time getting in their steamy first kiss (while Barbara received the big chill when crashing at her parents’ house).

Though I’m unsure of Gotham’s ultimate plan for Dr. Thompkins, I like that they kinda just said “Eff it” and fast-tracked the romance with Jim. We all knew that’s where it was going, so just get there. No foreplay needed (no pun intended).

You also know it’s a good episode when the often-tedious mob war story captures your attention. This episode was about to try my patience, as Fish uncorked a wholly obvious scheme to force Falcone out of town. Luckily, Penguin recovered from The Electrocutioner’s attack on the GCPD in time to put the bug in Falcone’s ear that Liza was planted in his life, by Fish. As a result, Falcone arrived at Fish’s (always empty) nightclub not with his tail between his legs but armed to the gills. And upon confirming Penguin’s hunch, he choked Liza to death, chided Fish for using the memory of his “sainted mother” against him, and then took Fish and Butch prisoner. And just like that, Falcone got 10x more interesting.

What did you think of the Ben Edlund-penned “What The Little Bird Told Him”?