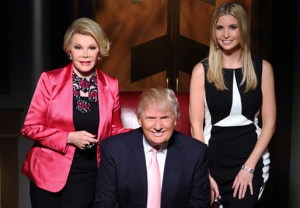 Ivanka Trump’s shoes were made for walking — and that’s exactly what two more celebs did after being fired in Monday’s Celebrity Apprentice.

The first hour required Teams Vortex and Infinity — once again mixed-and-matched per Donald Trump’s request — to create an interactive marketing event to promote Ivanka Trump’s shoe line. With the Donald’s daughter, an executive from Nordstrom and the late Joan Rivers serving as judges, the pressure was on like never before. So, who rose to the challenge?

Kenya Moore’s team went with a café theme to show off its shoes, while Vivica A. Fox’s team opted to display its inventory in an outdoor recreation of a Nordstrom store. Team Moore got the win for going “above and beyond” creatively, and when it came time to re-enter the boardroom, project manager Fox brought Kate Gosselin and Shawn Johnson along for the hellish ride.

Rather than send home Fox — as many believe the project manager is responsible for the team’s success — Johnson was thrown under the bus and, ultimately, let go. (Does anyone think it’s ironic that, in her exit interview, Johnson attributed her loss to being “only 22,” when just a few weeks ago the celebs were saying that age isn’t a factor in the competition?)

The second hour required Teams Vortex and Infinity to create viral videos for Chock Full o’Nuts coffee, and create they did — with very different results.Vortex played it safe, casting Geraldo Rivera as a tuxedoed song-and-dance man over two different time periods. Infinity, meanwhile, thought a bit outside of the box, staging a catfight-turned-bedding between Moore and Brandi Glanville.

Unsurprisingly, the Nuts people preferred Leeza Gibbons’ team’s edgier approach, forcing Lorenzo Lamas‘ team back into the boardroom for another bloody battle — with most of the blood splashed across Fox and Gosselin. But rather than throw either of those ladies under the bus, Lamas decided to use himself as a human shield, resulting in his untimely firing.

Did Johnson and Lamas deserve to be fired this week? Drop a comment with your thoughts below.