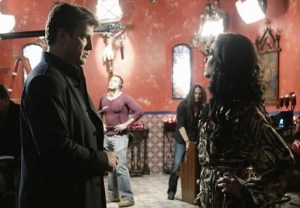 So, Castle viewers, it appears we are 2-for-2 thus far in the private eye arc.

Because whereas last week’s episode found much merriment in Rick’s very first case, one which pitted him against Beckett and the boys, this time around there was the entertaining wrinkle of him working his own case — the search for a telenovela star’s valuable purse — which was at first only tangentially, but then directly, related to the murder at hand.

Sure, Rick’s P.I. business has yet to take off, website revamp or not. (Did anyone else freeze-frame the screen to search for Easter eggs in the text?) But maybe his involvement in this glamorous case will get the phones ringing?

Other sustained positives over these first two “Castle, P.I.” episodes: Rick learning the ropes of obtaining information/”canvassing,” even when it requires peeling off some Benjamins. Ryan’s turns as “Baby Castle” continue to amuse. And the focus on Perlmutter (who is positively reveling in Castle’s absence from the 12th) is allowing him more opportunity to serve up sass.

And maybe it’s the time spent apart, and/or Rick’s Philip Marlowe-style narration (of his own workdays), but Beckett’s been rather randy as of late. (“I’m just a girl looking for a private dick”?!)

On the downside: The murder case itself was wrapped up a bit too easily — A sparkly purse isn’t seen and snatched from a NYC sidewalk planter over the course of days! The killer near-instantly confesses! — and Kamar de los Reyes’ involvement was oddly passive. (Why couldn’t he have played or been the killer?)

What did you think of “Private Eye, Carumba!”?