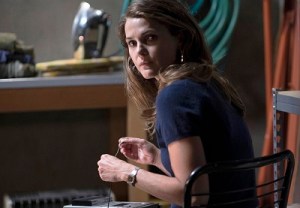 The Americans star Keri Russell is sticking up for her onscreen alter ego when it comes to Elizabeth and Philip’s conflict over daughter Paige’s future and whether she should become part of the second-generation legals program.

While Philip is staunchly against the idea, Season 3 (premiering Jan. 28 on FX) finds Elizabeth spending more time with Paige at her church in order to get closer to her.

“I don’t look at it like I’m recruiting this teenager to do what I do and turn tricks for strangers,” Russell explained during a Television Critics Association winter press tour panel. “She’s this mother watching a daughter being indoctrinated by someone else. If she’s going to be indoctrinated by someone, it’s going to be me. She wants it to be important and about socialism.”

Russell added that Elizabeth’s actions “come out of great love for her daughter and wanting her to be a substantial human being. How do you navigate the world if you don’t know who you are?”

“It feels like a huge injustice for someone to not know who they are,” she added. “I feel like that’s a worthwhile argument.”

The discord between the husband and wife over the subject matter will continue to weigh on their marriage in the new season.

“Every time Philip rejects the idea of telling [Paige who they are], it’s that weird marital dance of Elizabeth feeling rejected by Philip,” Russell said. “You’re rejecting everything I am.”

The conflict between the marrieds is “really relatable” even if one isn’t a spy, Russell argued. “Raising children is an incredibly emotional experience. You each, as individuals, have different views on it, obviously, and it’s everything to you.”