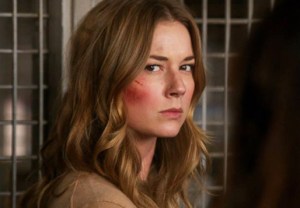 Did Victoria Grayson just save the day?

Malcolm Black nearly gutted Emily like a fish on Sunday’s Revenge, only to be interrupted by a surprise confession from Victoria: “I killed Kate. … I shot that bitch in cold blood. … And you want to know the best part? I loved it.” This distracted Malcolm just long enough for David, Jack and Ben — who, despite being only a little bit useful, is now an official member of Revenge‘s Scooby gang — to bust in and, with a barrage of bullets to the chest, finally take down Malcolm.

I guess Victoria’s selfless act made up for her totally throwing Jack under the bus earlier in the hour, urging Malcolm to reassess Jack’s connection to Kate. (Side note: Was anyone surprised to see Ben tied up when Jack returned? He’s always a few steps behind, that one.)

Speaking of revealing people’s secrets, what was with Emily telling Victoria about David’s plan to kill her at the lighthouse? Can Emily really afford to make an enemy out of her father? Dude is crazy, and I’m honestly surprised Victoria let him go so easily. Maybe she’s finally getting tired of this ol’ game, after all.

And Emily’s getting tired of turning down Ben, agreeing to “start over” with Jack’s partner moving forward. Could a new love triangle be brewing in the Hamptons?

IS THAT A THREAT? | As one enemy fell this week, another emerged; Margaux has already put her big revenge plan into action, hiring a sketchy suit to find evidence — any evidence — to use in an exposé that will, ideally, land Emily behind bars. Try as she might, not even Victoria and her pearls of wisdom (“revenge is a dangerous game”) could convince Daniel’s baby mama to back down. Some people just can’t help themselves, I guess.

CONGRATULATIONS (SORT OF) | Meanwhile, on The Nolan and Louise Show, Mama Ellis made a surprise visit to the Hamptons — this time in the flesh — with some fighting words for her darling daughter: essentially, if Louise breathes a word about her mother and Lyman drugging her, she can kiss her father’s inheritance goodbye. When Nolan discovered that marriage would free Louise of her conservatorship, he decided to make an honest(ish) woman out of her — but how will he feel when he finds out that, at least according to Mama Lyman, that Louise is responsible for her father’s death?

Your take on tonight’s Revenge? Do you think David and Victoria are really over? And how do you feel about Emily and Ben? Drop a comment with your thoughts below.