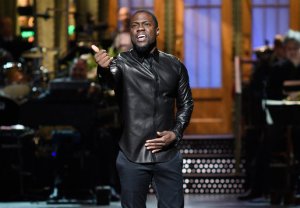 Kevin Hart fans, I hope you enjoyed The Wedding Ringer this weekend. Because, unfortunately, his Saturday Night Live hosting gig was a pretty dismal affair — packed with head-scratching sketches that should never have made it past the brainstorming stages.

Below, my picks for the night’s best and worst sketches.

BEST: Mrs. Santini
McKinnon’s grinning but cantankerous apartment dweller read scathing notes directed at her neighbors — including “the Mario Batali of hot garbage.” Her description of an infected earring hole and explanation of how a vet’s office is similar to a Dunkin’ Donuts were utterly wrong — and totally guffaw-inducing.

BEST: Justin Bieber for Calvin Klein
McKinnon’s delicious takedown of the pint-sized poser included sipped juice boxes, tragic pushups and Cecily Strong as a supermodel cringing her way through supposedly sexy scenarios. Sample dialogue: “Yo, my pee-pee’s in there!”

WORST: Soap Opera Reunion
One of the slightest setups in recent SNL history featured Vanessa Bayer as a daytime TV actress upset that her walk-on music differed from that of her co-stars. Perhaps this laugh-free sketch will prompt Lorne Michaels to ban the overused faux talk-show setup from the show for the next few weeks?

WORST: Escaping the Castle
Hart played a guy attempting to flee a kingdom under siege by dragons — if only the royal court would stop bursting into song about finding a new land. Was Hart ad-libbing his rants or did the show’s writers simply not bother to give him any punch lines?

What did you think of this week’s SNL? How would you rate Hart as a host? What was your favorite sketch? Take our poll below, then sound off in the comments!