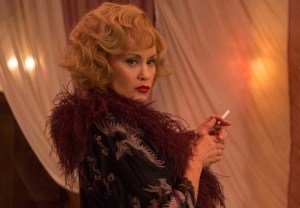 Pressed to reveal the theme to follow Freak Show (which finales on Wednesday), Landgraf deferred, “I know what it is, but I can’t [say]. I have to let [series boss] Ryan [Murphy] do his thing on that. But it’s very different.”

Landgraf went on to say of the franchise, “One of the things I love so much about that is that it can be radically, radically reinvented in terms of tone, setting, period, characters, cast.” And along those lines, “I think there’s going to be an unusually large reinvention in between Book 4 and Book 5 relative to, say, between Book 3 [Coven] and 4 [Freak Show].

The only Season 5 clue Landgraf perhaps let slip was when asked about the show returning to the present day (as it thus far has done with odd-numbered seasons). “That’s my hope, yeah,” he answered.

As for Emmy and Golden Globe winner Jessica Lange being a part of the next cycle — a while ago, she hinted in an interview that Freak Show would be her swan song — Landgraf has no information, explaining, “Ryan is really, really independent in how he makes these shows and what he does. So I know the setting, I know something about the characters and something about the tone and the time period, but I don’t actually know the cast yet.”