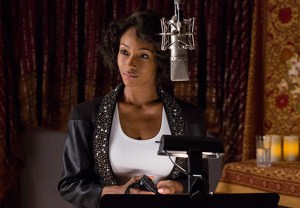 Question for the group: Should Whitney — Lifetime’s Whitney Houston biopic, which premiered Saturday — have been titled Whitney… and Bobby, instead?

The Angela Bassett-directed film is as much about Bobby Brown’s fall from grace as it is about Houston’s rise to stardom, chronicling the former R&B king’s drug addiction, musical aspirations and sexual indiscretions in vivid detail.

Then again, it’s only appropriate, considering Brown essentially called the shots in Houston’s life — at least according to the film — from the moment they first clicked that fateful night at the Soul Train Awards. From that point on, it was a whirlwind of steamy nights and knock-down, drag-out fights, with a few major events (their wedding, the birth of their child, etc.) thrown in for good measure.

Both Yaya DaCosta (Ugly Betty) and Arlen Escarpeta (American Dreams) turn in fine performances as both halves of one of music’s most infamous couples, while the vocals — re-recorded by singer Deborah Cox due to producers’ inability to secure the rights to Houston’s music — are eerily on par with the legendary singer’s.

Supporting players — like Suzzanne Douglas (The Parent ‘Hood) as Whitney’s mother Cissy, and Mark Rolston (The Shield) as music mogul Clive Owen — are also worthy of some praise.

Whitney might not tell the story viewers are expecting to see, spanning only a small portion of the late singer’s incredible career, but as merely a snippet of her tumultuous life in the public eye, it certainly gets the job done.

All right, time to share your thoughts on Whitney: Did it tell the story you were expecting? Were DaCosta and Escarpeta true to Houston and Brown? Were you at least entertained? Grade the movie below, then drop a comment with your full review. 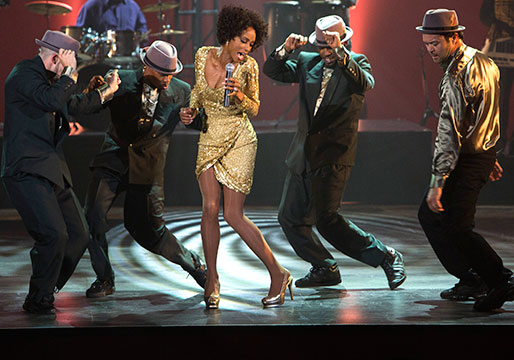