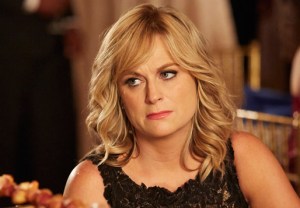 THE SHOW | Parks and Recreation

THE PERFORMANCE | In the first two episodes of Parks‘ final season, Leslie finds herself going up against friend-turned-foe Ron Swanson. The problem? Ron’s competing against Leslie to obtain a whole lotta land. The other problem? Leslie has no money to offer the (already) wealthy Newports, making her chances of outbidding Ron fairly microscopic.

While this major wrinkle in Leslie’s professional life had us pitying Poehler’s alter ego, we were thrilled to watch the actress shift effortlessly from joy to rage to desperation and back again within the span of an hour.

Even at Leslie’s most socially awkward, Poehler has always made Ms. Knope a character we can root for, and that skill was on full display in Tuesday’s premiere. Whether talking to Ron through gritted teeth (“Hello, former strange person I used to friend”) or earnestly lobbying the Newports to let her turn their land into a national park they can be proud of, Poehler used every minute to show off a remarkable range.

In the second half-hour, Poehler was completely in her comedic element. Her spot-on Megan Mullally impersonation brought us back to her Saturday Night Live glory days (Dakota Fanning, anyone?), and as Leslie slapped Councilman Jamm time and again, Poehler was as committed as ever to making us laugh.

Poehler may not have much longer to showcase her talents on Parks and Rec, but if this week’s dazzling performance was any indication, we’re going to enjoy the ride while it lasts.

From the instant that Person of Interest‘s Root peeled off her ski mask and revealed herself to Control, Amy Acker made evident a gritty new resolve to her already formidable femme. In the wake of Shaw’s apparent execution, Root is out for, at the very least, revenge, and at most, proof that her very special gal pal somehow survived. But it was two wildly contrasting scenes that socked us in the stomach, as Acker went from determined torturer to, in the episode’s final moments, a badass visibly and atypically rocked by this loss to her dark world.

isn’t your fault. You didn’t do anything wrong.” Little did we expect our hearts to crumble into a million tiny pieces by Two and a Half Men, but Ashton Kutcher gave a rare, emotionally vulnerable performance when Walden thought he was losing his foster son forever. (Yes, we know we’re talking about The Actor Formerly Known as Michael Kelso!) Ms. McMartin would have only been doing her job had she removed li’l Louis from the Schmidt-Harper residence after finding out Walden and Alan’s marriage was a sham, but in that moment, there was no denying how much Walden had grown to love the six-year-old as his own. Kutcher gave the scene his all, and did not disappoint.

HONORABLE MENTION | Glee is swinging for the fences in its final season, and its latest twist — Coach Beiste has decided to transition from a woman to a man — allowed one of the series’ second-tier actors, Dot Jones, to finally play in the big league. It’s always refreshing to see Coach Beiste’s softer side, and she’s never appeared more vulnerable than when she broke down and told Sue and Sam the truth about her plan to transition. By keeping her performance relatively small, forcing back tears and only allowing for a slight quiver in her voice, Jones exhibited the incredible strength one needs to undergo such a change.