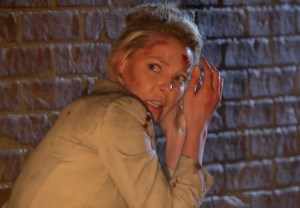 State of Affairs‘ state of affairs has been understandably disappointing for NBC brass.

Despite having been trained to “expect the worst” as a broadcast executive, NBC entertainment chairman Robert Greenblatt told TVLine on Friday at the Television Critics Association winter press tour, “I’m disappointed in what it’s been doing [ratings-wise] the last couple of weeks…. It’s a show that I think is a really fine show, so I’m scratching my head a little bit about why we can’t get more people to be there for it.”

Greenblatt, along with NBC entertainment president Jennifer Salke, went on to theorize that the freshman’s drama’s increasingly serialized element possibly turned some viewers off, while precluding new sampling.

Other topics tackled by Greenblatt and Salke during their TCA Q&A:

* Since “Thursday has been a problem for us,” because it’s “the definition of insanity” to keep trying new sitcoms, and since it’s an important night (largely because of theatrical advertising revenue), the execs stand by the decision to move The Blacklist away from its Monday home (starting Feb. 5, four days after its post-Super Bowl outing). “While the move is risky, it’s the only way to reinvigorate that night,” Greenblatt said. Hammocked at 9/8c between the new dramas The Slap and Allegiance, “We’re trying to create a new night of high quality drama.” Salke noted that Blacklist enjoys significant DVR gains regardless, since a “high percentage” don’t watch it on Monday night anyway.

* In the wake of Parks and Recreation‘s “up” final season premiere numbers, Greenblatt said he emailed Amy Poehler and series boss Mike Schur to (jokingly) ask, “You want to do another season?” But in truth, he reiterated, “The time is right to end it,” in part because the likes of Chris Pratt and others are being pulled away to do other, bigger projects.

* On NBC abandoning its new Bill Cosby comedy project, Greenblatt said the network will never again do business with the veteran comedian and target of numerous sexual assault claims. Back when the Cosby project was in development, “We heard some of those accusations, we knew there were settlements and what not, but it didn’t seem to be [at] critical mass…. But when that many people come out [with accusations],” as has happened in recent months, “there was no way that we could move forward with it.”

* The status of the freshman drama Constantine — which has struggled in the ratings and saw its episode count cut down — is not surprisingly “up in the air,” Greenblatt said.

* The oft-rumored next Chicago Fire offshoot, Chicago Med, “is something that we’re seeding into the system,” Greenblatt said. “We’re seeing if there’s a show there that could eventually spin off.”

* Also on NBC’s docket: A series of TV-movies based on the life and music of Dolly Parton, a miniseries about the Underground Railroad, and the Jennifer Lopez-fronted cop drama Shades of Blue (which starts production in June).