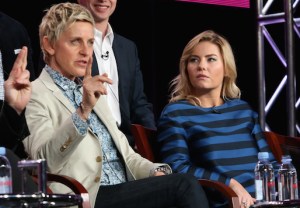 As the news broke that the Supreme Court would decide whether all 50 states must allow gay marriage, Ellen DeGeneres and Liz Feldman were setting the record straight about the new NBC comedy they’re producing/writing and which stars Elisha Cuthbert as a lesbian.

Based on Feldman’s own life — Cuthbert plays Liz, a woman planning to have a baby with her male BFF (2 Broke Girls’ Nick Zano) when he meets the love of his life (Kelly Brook) — One Big Happy “in a way is almost trying to pick up where [Ellen] left off,” Feldman said, alluding to DeGeneres’ eponymous 1990s sitcom, about a bookstore owner who ultimately came out as gay (after the star herself famously did). “The world is ready for that… but the most important this is that it’s funny.”

DeGeneres echoed that sentiment when waving off the suggestion that she seeks out gay-themed projects to shepherd. “It’s a very funny show — it just happens to have a lesbian character on it,” she said. “What’s going to be great about this show is [the characters are] people you’ll love and watch, and you won’t think twice about any of it being ‘weird.'”

Versus Ellen‘s time, DeGeneres said, “It’s obviously a more accepting world that we live in, for the most part.” But there is always work to be done. So, “If this is thought-provoking and helps people open their minds a little bit,” she is fine with that, of course. “But I don’t focus on that. I just look at it as a funny show.”

During their Friday appearance at the TCA winter press tour, the producers at one point were taken to task for having Cuthbert’s Liz be the only gay character on the series. DeGeneres responded by noting that in Episode 2, for example, an ex-girlfriend will pop up, albeit only in a guest-starring capacity. The character of Liz, after all, is “difficult” and hard to love, she explained.

DeGeneres then looked ahead to the year “2030,” at which time she’ll produce a comedy with “an entire lesbian cast and one token heterosexual — but we’re not there yet.”

Asked about the “challenge” in playing a lesbian, 24 and Happy Endings alum Cuthbert said plainly, “It’s like playing a human being, with a heart and a sense of humor, and who’s a little dorky at times and has a great collection of blazers” — just as Feldman famously sports. “That’s what it feels like.”