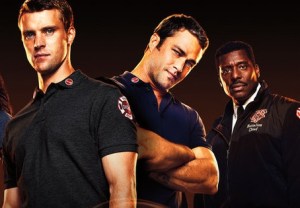 The doctor is in on Chicago Fire.

The NBC drama — which has already spawned spinoff Chicago P.D. — will play host to an “integrated episode” this season for a possible Chicago Med offshoot.

Wolf noted that the “embedded spinoff,” which will feature “an event that brings us inside Chicago Med,” won’t necessarily go to series.

In the end, “it’s 100 percent [NBC entertainment chairman Robert Greenblatt’s] decision, not mine,” he said. “We’d obviously love to do it, given the opportunity. But it’s above my paygrade.”

Before that hour, Fire and P.D. will stage another big crossover event on Feb. 3 centering around the arsonist (played by Arrow‘s Robert Knepper) who killed Shay and is now targeting Gabby.

“All I want to do is watch you burn,” the baddie taunts the firefighter in the trailer below.

Other highlights from the session:

* When a character’s leaving, such as with Shay’s death, “you want to maximize the effect,” Wolf said. “That’s why that methodology [for her exit] was chosen.”

* Lindsay’s arc on P.D. “with the task force went to the human notion [of] we’re always looking for the next thing,” Sophia Bush described. “How do I get better?” While her old unit is “very surgical and works like a family,” her new fed boss doesn’t care about CIs, leaving Lindsay to wonder, “Do I want what looks better on paper or was I happy in this place I was before?”

* On the topic of Severide’s wife (played by Graceland‘s Serinda Swan), Taylor Kinney replied with a laugh, “She was a wild woman. I don’t know where she is.”