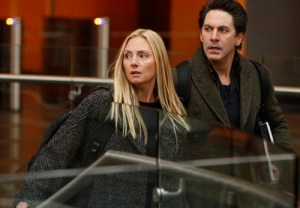 Is NBC’s upcoming Allegiance just a contemporary, broadcast TV take on The Americans?

Nyet, says the executive producer of the new drama, which centers around a young, idealistic CIA analyst (played by Gavin Stenhouse of the UK’s Iconicles) who is unaware that his parents (Gilmore Girls‘ Scott Cohen and The Newsroom‘s Hope Davis) as well as his sister (Revenge‘s Margarita Levieva) are part of a dormant Russian sleeper cell that has just been reactivated.

“Watch one or two episodes [of Allegiance] and I think it’s pretty clear that we’re going in a different direction,” EP George Nolfi said Friday at the Television Critics Association winter press tour. “This is, fundamentally, a family drama about people who really do not want to be spies. They’re forced into this situation. That’s just an extremely different setup, and then where we take it is really different, as well.”

Added star Stenhouse: “A lot of shows, I feel, have superficially similar premises. They’re based on similar things, but they’re a different emotional journey for the viewer. It’s born out of a completely different equation of actors and writers.”

Cohen also noted that the NBC drama is “dealing with an imminent danger” and “a post-9/11 generation” in its central character of Alex, “which is a bit different than what The Americans is.”

Leningrad-born Levieva, who is fluent in Russian, “definitely felt like [this was] one of those roles that comes once in a while that you were born to play,” adding that she’s turned down many Russian parts “because they’re written very stereotypically.” But when Allegiance came along, “I immediately felt like this was something I had to be a part of,” she continued. “The characters are so rich, and the way we deal with the Russian aspect is so authentic.”

And she can act as an on-set tutor to her TV mom Hope Davis!

“I was very excited to have something new to tackle in my life, and learning Russian is probably the hardest thing I’ve ever had to learn,” Davis shared after displaying some of her foreign language skills on stage. “I’m learning as fast as I can.”