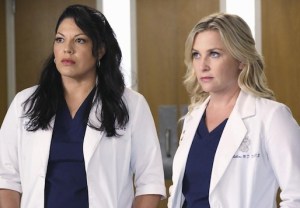 Comfort doesn’t get much colder.

But, according to Jessica Capshaw, ABC’s Grey’s Anatomy will be merciful to “Calzona” ‘shippers by keeping the separated marrieds… well, seperated in the wake of their heartrending break-up, when Season 11 resumes on Jan. 29.

“It’s respectful to the fans that really want them to be together,” Arizona’s portrayer told TVLine at a Television Critics Association press tour soiree, “because they don’t have to see them almost be together in every episode.

“It’s so smart of [the writers],” she added. “It hasn’t held any sort of inauthenticity. If you break up with someone, you would want some space.”

That distance not only is affording the audience a period of mourning, it’s also allowing Callie (played by Sara Ramirez) and Arizona to reboot as individuals. “The best thing the writers could have done, which is what they did for at least these next six episodes, is have [Arizona and Callie] just be on their own,” the actress noted. “They haven’t had to butt up against each other or be sad. They both dove into their own lives and have lived there.

“In a lot of ways, it harkens back to when Arizona first showed up [in Seattle],” she went on. “She’s working with Bailey again — Bailey is still putting it to her, and she’s still pushing back; she gets to work with Amelia Shepherd on [the] Dr. Herman [case]; and there’s still Karev, who shows up for her in a very significant way.”

Of course, in time, someone else is almost certain to show up for Arizona and/or Callie — as in a new romantic interest. (Paging Dr. Lauren Boswell? Oh, how we wish.) But perhaps also out of respect for Calzona fans, Capshaw insisted that she wasn’t aware of any new hook-ups on the horizon. (“You have to remember that Callie likes men as well,” she reminds, “so… who knows?”)

One thing of which Capshaw is certain is that the marriage is thoroughly damaged. “[The separation] wasn’t without thought,” she said. “It was very well-explained. They walked [viewers through] every facet of it.” (With reporting by Matt Webb Mitovich)

Except possibly our grief. What do you think? Would you prefer to see Calzona in or out of one another’s orbit as they adapt to singlehood? Hit the comments.