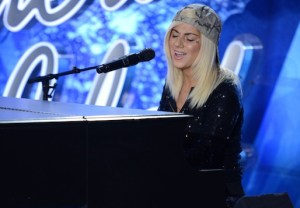 I mean, if soulful troubadour Hollywood Anderson — who stunned the judges (and moved J.Lo to tears) with a radio-ready original called “My Best Friend” — becomes the franchise’s next Kelly Clarkson or Carrie Underwood, any future contestant who shouts that phrase might sound more like they’re auditioning for CBS’ Stalker or another “this isn’t gonna end well” installment of 48 Hours: Mystery than Fox’s venerable singing competition.

Magnificent as Hollywood was, though, he’s no shoo-in to inherit the crown of that retro-rock dude whose Season 13 performances always got interrupted by J.Lo’s meticulously rehearsed, “I love your mother’s cookies“-inducing fits of headbanging/hair-flipping/sexyface.

Yep, start spreadin’ the news, Idoloonies, the sublime New York Auditions — with a tough and funny but always sweet Adam Lambert filling in for Keith Urban at the judges’ table — might be the starting point for a journey that ends with a confetti shower. As woeful as Wednesday’s Kansas City pitstop was, NYC churned out at least a half-dozen (maybe even more) vocalists who have the potential to still be in the competition when the Easter Bunny comes hoppin’ to town.

With that said, let’s jump straight into ranking tonight’s 17 Golden Ticket holders in order from least- to most-promising. 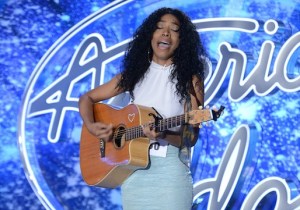 17. Eric Lopez, “Show Must Go On” | As I said on Twitter during the episode, dude’s Queen cover was “as messy as a Sloppy Joe served on a paper towel.”

15. Jackie Nege, “Born This Way” | I’d have loved this Lady Gaga cover — if I was on my fourth sauv blanc on a Thursday night river cruise. Otherwise, girlfriend needed more depth and emotional force to make her solid voice resonate.

14. Shi Scott, “Valerie” | Harry’s note that this stunning chica was doing a near note-for-note Amy Winehouse impersonation said it all. Plus, her “oh I’m so shy!” face-touching shtick seemed too rehearsed by half.

13. Courtney Zahn, “Classic” | I have no recollection, your honor!

12. Tion Phipps, “When I Was Your Man” | He had some pretty runs in there, but this montaged contestant betrayed a few too many pitch issues in his brief time on screen.

11. Sal Velentinetti, “In Other Words” | Hammier than a Croque-Monsieur — but I don’t think he missed a single note, so I wasn’t mad when J.Lo and Adam overruled Harry with their “yes” votes.

10. Adam Ezegelian, “Born to Be Wild”/”I’m Yours” | Adam (Lambert) proved his awesomeness as a judge when he asked Adam (Ezegelian) to show a different side of his voice after a Steppenwolf cover that bordered on parody. The dude’s take on Jason Mraz was far more grounded — and quitely lovely, actually — but I never want to see him in flip-flops again, K?

9. Qaasim Middleton, “Sir Duke” | Brooklyn fella with an outsized personality infused his Stevie Wonder cover with palpable rhythm, a bit of beatboxing and some entertaining dance moves. Still, there were some questionable moments in the vocal that left me wondering if he could be headed for a Hollywood Week meltdown. (Side note: I’m pretty sure I could’ve lived without Qaasim’s mom’s newsflash about his enduring virginity. Save that kinda stuff for… the 12th of Never!)

8. J. None, “My Prerogative” | You bring a little Bobby B. (even “Glasses“) to the audition rounds, and you’re halfway to Hollywood in my book. Thankfully, dapper and dashing J. had the tone and control to complete the mission — and add to the strongest roster of black male contestants Idol has seen in years.

7. Nick Fradiani, “In Your Eyes” | I liked the way Nick took risks with Peter Gabriel’s melody without renedering it unrecognizable — and the weathered, smoky tone of his voice was as beautiful as a ramshackle, abandoned barn one might encounter on a hike through the country (if one were inclined to hike, that is). Still, I wonder why his “Cups”-playing girlfriend’s totally solid vocals didn’t at least land her a Golden Ticket — at least for some added Hollywood drama.

6. Maddie Walker, “Suitcase” | Returning Season 13 contestant — “but she’s only 16!” says Randy Jackson — nailed the pitch so perfectly on a tune by Voice grad Gwen Sebastian that Harry said she sounded Auto-Tuned. Super-young vocalists have a spotty track record on Idol, but Maddie’s massive growth over the last 12 months could make this kid one to buck the trend.

5. Travis Finlay, “Stay” | Between the leather pants and the five extra layers of emotions this handsome specimen brought to Rihanna’s best ballad, I’d almost have gone out on a limb and called him a Season 14 front-runner. J.Lo, though, confirmed what my ears didn’t quite want to admit: That his showy runs weren’t 100% on point — and that he either needs to scale ’em back by 10-20% or find a way to hit ’em all square on the nose.

4. Katherine Winston, “If I Didn’t Know Better” | Katherine’s gorgeously understated, bourbon-soaked vocal played underneath a montage of rejected contestants. Thankfully, though, this young lady’s slinky twist on my favorite Nashville soundtrack cut (originally by the Civil Wars) set her apart from the parade of the damned — and put her right through to Hollywood.

3. Najah Lewis, “Payphone” | I never really cared for Maroon 5’s 2012 jam — not until Najah gave it an impassioned, acoustic jolt of energy. The richness of her lower register — and her understated confidence — could be a lethal combination, should the judges advance her to the voting rounds. Think Majesty Rose — with a more solid sense of musical identity.

2. Hollywood Anderson, “My Best Friend” (original song) | I found myself once again nodding along with J.Lo — much to my surprise/horror, I know — I’d download “My Best Friend” tomorrow if Hollywood had a version on iTunes. But beyond the charismatic dude’s way with a lyric — “we’ve got the kind of love that could make a blind man see” — his evocative, craggy tone and lilting upper register gave the impression it could easily wrap itself around rock, soul, jazz  or whatever genre Idol throws his way.

1. Jax, “I Wanna Hold Your Hand” | This is how you make an impression when fate (or Per Blankens) hands you a two minute audience with Adam Lambert & Co.: Jax got behind the piano, took the romantic essence of The Beatles’ boppy love song and reinvented it as a ballad filled with romance and longing. Her Norah Jones-y delivery and that little crumbling note right at the end left me wanting to hear a lot more from this 18-year-old Jersey gal — hopefully we’ll get that chance in Hollywood.

On that note, I pass the mic to you. Who was your favorite from Night 4 Season 14 auditions? Take our poll below, then sound off in the comments!