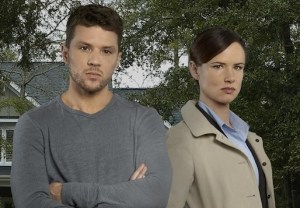 Can a drama about a dead child ever possibly thrive on TV?

In the wake of Fox’s Gracepoint putting up low numbers throughout its one-and-done run, ABC will test audiences’ appetite for a kid-centric murder mystery with Secrets and Lies, which itself is a U.S. adaptation of a foreign (Australian) series.

Premiering Sunday, March 1 at 9/8c, the midseason drama stars Ryan Phillipe (Damages) as Ben Crawford, a suburban family man who immediately emerges as a suspect in the murder of a neighborhood boy whose body he discovers while out for a jog. KaDee Strickland (Private Practice) plays Ben’s wife Christy, while Juliette Lewis (August: Osage County) is the stone-faced police detective working the bleak case.

The cast also includes Natalie Martinez (Under the Dome) as the victim’s mother and Dan Fogler (The Goldbergs) as Ben’s slacker friend.

Appearing at the Television Critics Association winter press tour panel, the Secrets and Lies cast and producers were of course met with questions about Gracepoint/Broadchurch similarities, to which Lewis quickly quipped: “Ours is so much better.”

Executive producer Barbie Kligman — who says she purposely didn’t watch Gracepoint until over the holidays — explained that the Fox series and its UK inspiration were “more traditional in terms of being many points of view and going on a journey with two detectives.” Secrets and Lies meanwhile delivers “a singular point of view,” that of prime suspect Ben. As such, “Ours is a character drama with an underlying mystery.”

But is a show centered on the death of a child (as opposed to an adult who, for all we know, could have had it coming to him) simply too unpalatable to ever draw a mass audience?

“Of course it’s tragic — perhaps the worst thing that can happen,” Kligman acknowledged. “But the show is about so much more than that. The journey is very much Ben Crawford’s attempts to prove his innocence. And in doing so, what it becomes much more about is the secrets and lies that the people around him are keeping. [It’s about] how he starts to look at all the people around him and realize he doesn’t know his neighbors, he doesn’t know his family. He may not even know himself.”

One thing Secrets and Lies does share with Gracepoint/Broadchurch is that the initial mystery “will be resolved at the end of this [10-episode] season,” Kligman said, “and in hopefully subsequent seasons we will have a different mystery.”