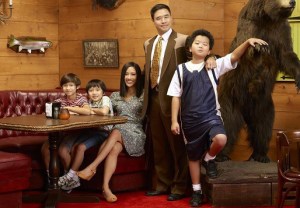 Eddie Huang isn’t throwing ABC’s upcoming Asian-American comedy Fresh Off the Boat — which is based on his memoir of the same name — overboard.

Despite his recent editorial for Vulture, claiming that the show watered down his book, Huang voiced his support for the sitcom at a Television Critics Association press tour panel in Pasadena on Wednesday.

“I care the most about the conversation that’s going to happen because of this show,” he said. “This show, to me, is historic. This show has a huge place, culturally, in America.”

“It’s important, for me, to have a qualified support for this show — makes sure this show stays authentic to the book and people of color in general,” he continued. “I believe this show is very strategic and smart in how it’s opening things up.” For example, the way the comedy deals with the word ‘chink’ in the first episode “is borderline genius and insane at the same time.”

As for his exclamation in the article, “Why isn’t there a Taiwanese or Chinese person who can write this?” — executive producer Nahnatchka Khan (Don’t Trust the B— in Apt. 23) was born to Iranian parents — Huang said, “I absolutely feel like we should have more writers of Asian-American descent in the writers room. But I do not debate Nahnatchka’s ability, at all, to do the show.”

Added Khan, “For me, I related to this when I read his memoir. The specifics were different to my growing-up experience. What I really related to was the immigrant experience. That was my access point.”

Khan had nothing but positive words about Huang’s editorial, saying she was “thrilled” when she read it. “I really value Eddie’s voice in the process. … Eddie is the heart and soul for the inspiration of the show.”

Fresh Off the Boat‘s tough time slot — Tuesdays at 8/7c opposite NCIS — was also a point of concern during the panel, but Khan is optimistic that the family comedy will connect with viewers.

“We’re excited for this show to be on at 8 o’clock so parents and kids can watch together,” she shared. “Hopefully, it breaks though, people will find it and it will build an audience.”