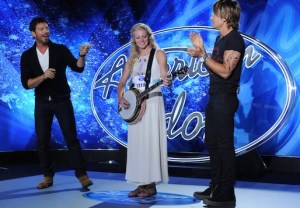 A random thought crossed my mind tonight while watching American Idol‘s Season 14 audition episode from Kansas City: What if Goldilocks hadn’t found a single bowl of porridge that met her exacting standards? What if not one of the three bears’ beds had proven suitable for her afternoon respite?

Girl might’ve just wandered out of the woods, been admitted to her local hospital with a case of mild hypothermia, treated and released. Not much of a story, huh?

Similarly, I’d gander that Idol‘s latest hour is one of the least likely in show history to penetrate the pop-cultural consciousness. Too ridiculous! Too off-key! Too studiedly quirky! Too nervous! Too stinky! (No, I’m not projecting — Harry Connick Jr. himself described the episode’s last Golden Ticket recipient as “ripe.”)

In other words, as J.Lo so timidly put it, Kansas City (which played host to “best of the best” from the show’s bus tour auditions of small cities) is not going to be the launching pad for the Season 14 champ — unless, for some baffling reason, executive producer Per Blankens decided to shield our eyes from the city’s brightest Hollywood-bound contestants. (Goodness gracious, we certainly wouldn’t want to front-load the talent at a time that even the most loyal members of the Idoloonie Nation are questioning whether or not to invest two-to-four hours per week visiting The House That Houses J.Hud’s Oscar.)

With that said, let’s quickly rank tonight’s 11 Golden Ticket recipients in order from least- to most-promising.

11. Cedric, “Rumor Has It” | We didn’t see much of the handsome crooner’s audition — just a few seconds of aggressive belting and then a “will he or won’t he advance?” Twitter poll. For what it’s worth, I’d have said “Nope.” #IPreferNuance

9. Ashley Lusk, “Boondocks” | An hour after the show, I can’t recall a single detail of her shown-in-snippet of her audition. Help a recapper out with some misty water-colored memories down in the comments, K?

8. Kholton Pascal, “Sittin’ Here Beside You” | Hitchhiking drifter showcased an ominous, gritty tone — but how did the judges advance him on the basis of an unmelodious original tune with no more than a three-note range? I’d have asked for a second (recognizable) song before I switched on the green light for Kholton.

7. Josh Sanders, “Washed by the Water” | Sounded pretty good on his Needtobreathe cover, but with only a few seconds of his actual singing shown on air, what are the chances he’ll ever appear on our screens again?

6. Joey Cook, “King of Spain” | Blue-haired accordion player served heaping amounts of quirk, but I thought her mastery of her instrument covered up instances where her voice thinned out in an almost alarming fashion. Taking a wait and see approach before I board the Oh Em Gee Adorbs Express.

5. Alexis Gomez, “Little White Church” | I dug this country gal’s energy and vibe perhaps a little more than her actual singing. But the vocals were solid, if not spectacular.

4. Anton Bushner, “Tonight I Wanna Cry” | Cowboy-hat-wearing Kansan looked so nervous about/overcome by his audition experience that tears actually welled up in his eyes. But while there were moments where nerves threw his pitch off just so slightly, there was an authenticity to his delivery that simply can’t be taught. A contender in Season 15, maybe?

3. Stephanie Gummelt, original song | This chick’s squeak of a speaking voice did little to tip off the lovely, lilting tone of her vocals — or the maturity in the lyrics of her original jam. Like Harry noted, though, she’s a singer who could probably use more life experience to inform her vocal performances. As with Anton, I’m kinda hoping she’ll be a Hollywood Week cut who returns next year.

2. Casey Thrasher “Who I Am With You” | A last-minute evictee by the judges in Season 13, Casey got far less screen time this year, but sounded rock-solid in the few bars we heard. And because work ethic’s about as important as anything else in this competition, I’m kinda rooting for this guy in his second trip to the rodeo.

1. Ellen Petersen, “I Wanna Be a Cowboy’s Sweetheart” | Adorable 22-year-old closed the night by playing the Beverly Hillbillies theme on her banjo while Keith and Harry took over vocals. It was her sweet, airy tone (and classic yodel) on Patsy Montana’s old-school country jam, however, that pintpointed Ellen as the sole possible Top 10-er of the entire Wednesday episode.

On that note, I pass the mic to you. Who was your favorite from Night 3 Season 14 auditions? Take our poll below, then sound off in the comments!