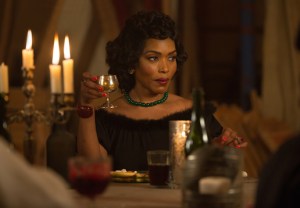 And now, the end is near… But, despite the fact that American Horror Story: Freak Show had already killed off Ethel, Twisty, Meep, Dora, Regina, Gloria, Ma Petite and Dell — and then some! — it still managed to scare up another victim for its penultimate episode. For whom was “Show Stoppers” closing night? Read on and find out!

REST IN PIECES | Since last week Maggie and Desiree exposed Dell’s role in Ma Petite’s murder to Elsa — and she exacted swift vengeance — it stood to reason that this week Stanley would get his overdue comeuppance. And did he ever. After dismissing Chester from what appeared to be a farewell party for Elsa, the freaks presented the villain with a gift: museum curator Lillian’s head in a jar! Next, he was strapped to the wheel and stabbed in the leg. Elsa killed Ethel, he shouted — to no avail. The freaks, armed with all manner of pointy things, chased him under a trailer and served him his just desserts.

LOBSTER TALES | The following day, Elsa disclosed to Jimmy that the freaks had done in his father for breaking their code and killing Ma Petite. She added that the lobster boy should be grateful to Maggie for coming forward; if she hadn’t, a lot more freaks would have met their maker. Unfortunately, he remained too bitter and depressed to believe that the reformed grifter really loved him. (Then again, did anyone really fall for their romance?) Shortly thereafter, Massimo Dolcefino — you remember, the artist responsible for Elsa’s legs — arrived at the fairgrounds, at her request, to fashion Jimmy a pair of wooden hands.

IT TAKES ONE TO KNOW ONE | Meanwhile, Dandy — determined as ever to win back the Tattler Twins — tried to reveal to the sisters their new lover’s blood-spattered past. (And if that isn’t the pot calling the kettle psycho, I don’t know what is!) Though they refused to listen to a word, the file that Dandy left behind filled the siblings’ heads with doubts, so many that they declined to continue as Chester’s assistants. Growing increasingly upset, the magician suggested that they instead play the victims that he sawed in half. Again, they said no, at which point Maggie volunteered to fill in. Worst. Timing. Ever. Chester came completely unglued, manacled Maggie’s ankles together and sawed her in half in front of his horrified staff! WTH do they do now? Since Stanley’s ex-partner had it coming, Desiree suggested that they “steal her jewelry and bury the bitch.” (As for Chester, he killed Marjorie to keep her from leaving him — crazy-person logic — then presented her “body” to the police.)

PAYBACK ISN’T ALWAYS A BITCH | As the freaks reconsidered Stanley’s accusation against Elsa — with Paul suggesting that “there’s only one way to secure our future: Make sure [she] doesn’t have one” — she revealed to Jimmy not only Massimo Dolcefino’s handiwork but their star-crossed romance… and the fact that Hans Gruper (Dr. Arden from Asylum!) had been the Nazi mastermind behind her mutilation! Later, Bette and Dot, of all people, warned Elsa that her freaks were planning her murder as payback for Ethel. When Fraulein Mars noted the irony of their saving her, Dot (or was it Bette?) replied, “Now we’re even.”

THE SHOW MUST GO ON | On her way out of town, Elsa met with Dandy and collected $10,000 — payment, it turned out, for the freak show! No sooner had the troupe’s latest boss taken a practice bow on stage than he heard a strange noise. Investigating, he discovered — holy crap! — Stanley, alive and anything but well! The freaks hadn’t killed him, they’d turned him into a horrifying composite of all of them! Finally, as the hour drew to a close, Jimmy tried on his new hands… only they weren’t hands at all but wooden flippers. “They’re perfect,” he told Massimo Dolcefino. “Thank you.”

Okay, your turn. What did you think of the episode? Were you more surprised that Maggie bit the dust or that Stanley didn’t? Given what the freaks did to him, I thought she got off easy! Hit the comments!