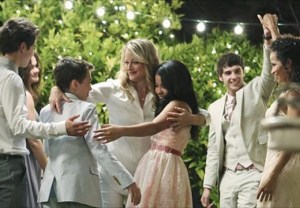 There’s going to be even more Fosters — as in episodes, not adopted kids.

ABC Family has renewed the drama for Season 3, the network announced on Tuesday.

“We are thrilled to be making more episodes of The Fosters – a show that has not only garnered critical acclaim and numerous awards but resonates with our passionate and committed audience,” ABC Family’s EVP of Programming and Development Karey Burke said in a statement.

* David E. Kelley (The Crazy Ones) is adapting Stephen King’s novel Mr. Mercedes as a limited series, per The Hollywood Reporter. The bestseller tells the story of a psychopathic killer who commits mass murder by driving his Mercedes into a crowd, and the recently retired cop who makes it his mission to bring him down.

* Bradley Whitford (The West Wing, Trophy Wife) will guest star on Brooklyn Nine-Nine as the pilot father of Andy Samberg’s Det. Peralta. Whitford will make his debut in the March 8 installment (8:30/7:30c on Fox).

* ABC Family has picked up the unscripted series Job or No Job, which follows one young adult per episode on his or her journey to land employment.

* Showtime’s one-hour comedy pilot Roadies has added rapper/actor Colson “MGK” Baker (AKA Machine Gun Kelly, Beyond The Lights) to its cast. He will play the big-hearted twin brother of Imogen Poots’ character.

* Cameron Monaghan (Shameless) will guest-star on Fox’s Gotham as Jerome, who is involved in the circus and will cross paths with city police during a murder investigation, Give Me My Remote reports.