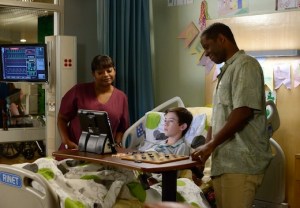 Red Band Society still has a heartbeat — albeit a faint one.

While Fox decided in November not to pick up any more than the 13 originally ordered episodes — which is usually a sure sign of impending cancellation — the network has decided to schedule the show’s final three installments.

A Fox spokesperson confirmed Red Band Society will return to the schedule on Saturday, Jan. 31 at 9/8c, and then conclude its run with back-to-back episodes on Feb. 7 at 8/7c. TV Guide Magazine first hinted at the news.

In December, showrunner Rina Mimoun promised a satisfying conclusion — and a major character death — during the course of Red Band‘s final three hours. “There’s closure for a lot of the current teen storylines that you’ve been watching, but the [final] episode also shows you how the series itself is open-ended,” she explained. “Octavia Spencer is the lead of this show. She’s the heart and soul of Ocean Park Hospital, and it shows you that certain Red Bander stories may be all tied up, but we can tell other stories of people coming into the hospital using our amazing staff of Octavia [Spencer], Dave Annable, Rebecca Rittenhouse and Wilson Cruz — whose Kenji has become my favorite thing ever.”

Mimoun urged fans to fight for a Season 2. “That is how these shows come back — because there is momentum from the people who love it,” she said. “When fans fight, it forces the network to say ‘OK, wait a minute. Let’s rewatch. Let’s look at all the numbers. Let’s look at the live [numbers]. Let’s look at the DVRs.’ And that’s the theme of Red Band: ‘Don’t give up.'”

Will you be tuning in for Red Band‘s final run? About which character’s fate are you most worried? Sound off below!