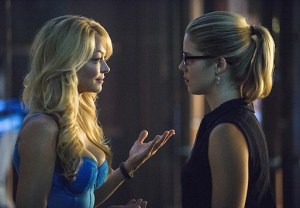 Mom’s (again) the word on The CW’s Arrow, now that Charlotte Ross has booked an encore as Donna Smoak.

TVLine has learned exclusively that the NYPD Blue alumna will reprise her role as Felicity’s flashy mother in this season’s 18th episode.

Ross received a warm reception from viewers with her first appearance on the hit action-drama, which aired in early November and revolved around a dark piece of Felicity’s past coming back to haunt her.

Arrow resumes Season 3 on Wednesday, Jan. 21, with Episode 10, which is titled “Left Behind.”