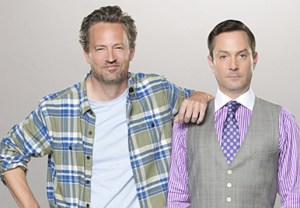 After spending 10 years in the role of Chandler Bing, Matthew Perry’s return to a multi-camera sitcom could have been daunting.

But the actor maintains that working on CBS’ The Odd Couple reboot has allowed him to check an item off the bucket list.

But that’s not to say Perry doesn’t get nervous, even after more than 200 episodes in front of a live audience on Friends.

“You’d think after 25 years of doing this, I wouldn’t sweat profusely if a joke doesn’t work, but I still do,” Perry confessed. “I ham it up because there’s an audience.”

“The DNA of those two characters has seeped into television for the last four decades,” Daily said. “Those two characters are so iconic, they’re so timeless. It’s been 45 years, and I think it’s time for a reinterpretation for a generation that’s not familiar with The Odd Couple.”

For Perry, returning to a live sitcom — after his short-lived series Mr. Sunshine and Go On were cancelled — is an opportunity to do what he loves most.

Will you get to know The Odd Couple this winter? Hit the comments!