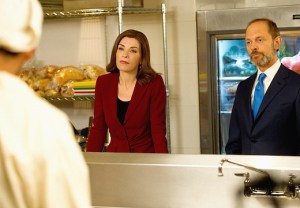 On this week’s installment of The Good Wife, our protagonist bristles at her law partners for making a massive decision about their firm’s future without consulting her — only to be met with the high-end equivalent of a shoulder shrug and an exasperated “Woman, pleeease.”

Seeing Diane and Cary unapologetically get on with the business of running a major firm while Alicia becomes fully immersed in her run for state’s attorney proves fantastic on two levels: First, it ties up the nagging, season-long plot hole surrounding the named partners of Florrick-Agos-Lockhart never weighing in (on screen) about whether or not Alicia could/should run for office less than a year after the firm’s launch. And secondly, it creates yet another undercurrent of tension in the complicated web of relationships that showrunners Robert and Michelle King have spun over the past six seasons.

The instigating event in Diane-Cary Vs. Saint Alicia turns out to be the loss of Neil Gross/Chum-Hum as a client, thanks to the firm’s less-than-effective representation during the billionaire’s divorce proceedings? Using the “if you can’t beat ’em, join ’em” (or the “we’ll go belly up without some replacement for this lost revenue”) philosophy, Diane and Cary act quickly to poach delicious nemesis David Lee from his alliance with David Canning and put him back on their team. When Alicia finds out this has all gone down during her verrrry long State’s Attorney debate, she’s surprisingly, almost infuriatingly indignant. “You can’t just…” she huffs, then reconsiders. “I’m a named partner. This is a decision for all of us.”

Diane, though, is ready with a counter-punch: “No, it isn’t Alicia — not anymore. You running for State’s Attorney — that was a decision for all of us,” she says, and yes, Ms. Lockhart takes her glasses off mid-conversation like a total boss. Diane adds that Alicia initially said she was running in order to beat Castro (aka the guy who was falsely prosecuting Cary), but with him out of the race, the question looms: “Why are you still in?”

Alicia gets even angrier over what sounds like a completely valid query, grousing that Diane would never pose that question to a male candidate. Alicia’s got a big campaign staff, 38,000 donors and she thinks she’d make a better State’s Attorney. “There? You have a problem with that?” Alicia seethes, before turning on her heel and marching back to her office.

Trouble is, Diane and Cary don’t have a problem with that. They have a problem with Alicia thinking she can campaign for public office as a full-time job, but also continue to have an equal say in the future of a business she that’s no better than No. 2 on her list of priorities. Is this the same Alicia who started Season 5 with a joyous decision to join Cary in leaving Lockhart-Gardner and starting their own venture?

Look, I’m not saying it’s not this woman’s prerogative to change her mind, but Alicia shouldn’t expect her partners to remain in an extended state of limbo while she reaches the crescendo of her campaign — and with a huge chunk of her savings tied up in the firm, nor should she want them to. (A better argument for staying in the race, honestly, might be that Alicia dropping out at the 11th hour would be an embarrassment, a sign to the firm’s clients that the Governor’s wife is somehow capricious or less-than-steadfast.)

What’s intriguing about this twist in the action, though, is realizing how much of Alicia’s self worth is tied up in the State’s Attorney’s race: In the last year, she’s lost the love of her life to senseless gun violence, she no longer has any intimacy (physical and emotional) with her estranged husband, her son has gone off to college, she’s keeping Finn at arm’s length, and she’s not really involved in trying cases or running the operations of the firm. If Season 6 were a night in Vegas, Alicia would be at the poker table at 2am, with all her chips riding on a single hand of the current election cycle.

As the episode ends, Alicia doubles down on her belief that — polling numbers be damned — she’s got this race won. And while I’m not sure whether a victory or a loss opens up the more exciting dramatic avenues for the show’s writers, I’m certainly eager to see it all play out.

Since it’s Golden Globes night and our Best/Worst Moments gallery has made me late in getting this recap finished, I’m gonna break down the rest of the week’s action in pithy bullet points, and let you handle the big related questions down in the comments section:

* The show’s fictional take on the killings of Michael Brown and Eric Garner provides an insightful, though occasionally hard-to-watch look at the politics of race. Eli, in particular, measures the public-relations value of every aspect of a jury trial that ultimately exonerates two officers for killing an unarmed black man named Cole Willis, but we also see Gov. Florrick, the Mayor and his chief of staff, Alicia and Frank and local religious leaders grappling how best to spin their opinions and their involvement in the ugly business while standing in front of a backdrop of angry community protests. Eli’s right-hand woman Nora (Nicole Roderick), meanwhile, gets a moment to shine. Usually, she’s his harried-but-silent companion. But when he invites her to accompany him to various campaign stops on the night of the Willis verdict, she confronts him head-on with his hypocrisy: “I‘m your black shield tonight,” Nora finally determines, providing a tart and emotional balance to Eli’s mercenary POV.

* Peter and Ramona are kaput! An area newspaper lands pics of Peter exiting Ramona’s apartment two nights before Alicia’s debate — and plans to run the allegations of an affair. Knowing he needs to be “effective” in the wake of the Willis verdict, and (even though he never comes out and says it) that his long-term political prospects could be harmed by revelations of another instance of infidelity, Peter summons Ramona to his limo, and 10 minutes later, she exits, crying. “We said goodbye,” she tells Eli, smart enough to understand why, but invested enough to still be devastated. Is this truly the last we’ll see of her, though? I kinda hope not — given that “Peter in actual love” is much juicier than “Peter merely shtupping an intern.”

* Alicia and Johnny are kaput? Alicia explains to Johnny her kiss was a matter of circumstance, not an indicator of a lingering crush (or lust). Just when it seems like she’s gotten through with her breezily “let’s forget it!” message, though, Alicia realizes she never bothered to ask if Johnny has feelings for her. And the look on his face is kinda, sorta spelling out, “I’m smitten with my client!”

* Alicia and Frank’s debate takes a very circuitous (and open-ended) path. During Alicia’s televised showdown with Mr. Prady, the Kings skewer the ridiculous ground rules of debates — the 10-second ‘lightning round’ was my fave — and how they often stifle meaningful discourse. But when the Willis verdict interrupts the proceedings, and Alicia and Frank find themselves alone foraging for food in the hotel kitchen, a true back-and-forth is able to happen, with Alicia making a compelling case for why inexperienced dreamers often falter once they’re elected. “Vote realistic cynicism!” isn’t a great slogan, either, but Candidate Florrick’s philosophy — she can’t do anything to cure racism or make people good, but she does know the mechanics of how prosecutors fail in court — seems to sit on a solid foundation. Once the network is ready to resume the debate, though, Alicia finds Prady has left the building, wanting to continue the podium showdown only after he’s had time to “take action” and to “listen.” The biggest win of the night, then, has to go to Alicia, who shuts down that aforementioned reporter’s Peter-Ramona query before he even has a chance to pose it: In a fired-up monologue that’s both pragmatic and deeply feminist, Alicia wonders in what job, exactly, would it be relevant that her husband has weathered an infidelity scandal — and asks him to remember not only her own humanity, but that of her daughter and her opponent, too.

* The Life-Without-Kalinda playbook begins here: We barely see Archie Panjabi’s investigator this week — save for some brief scenes in which she exposes marital infidelities by Neil Gross’ boss — but perhaps this is just the Kings’ way of weaning us off our obsession with Ms. Sharma (and her boots).

On that note, it’s your turn. What did you think of this week’s Good Wife? Hit the comments with your thoughts!