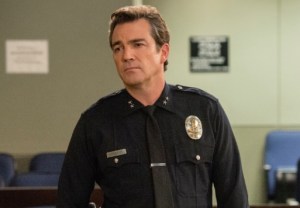 Tonight at 9/8c, TNT’s Major Crimes delivers a two-hour season finale in grand fashion, by bringing back — in the flesh — Phillip Stroh, the legal lizard/serial rapist/murderer who oft taunted Fritz Howard’s wife Brenda on The Closer.

In fact, in that series’ finale, Stroh attacked Brenda in her and Fritz’s home. As such, his resurfacing — as part of the latest twist in the case that introduced Rusty to the Closer/Major Crimes universe — strikes a special chord with Fritz. Jon Tenney shared with TVLine a preview of the villain’s revival.

TVLINE | First of all, congratulations on the latest directing turn at Major Crimes. They gave you a pretty juicy episode [two weeks ago, in which Flynn saves a jumper with a sketchy past].
Yeah, that was a really fun script by Damani Johnson. He’s one of the new writers on the show, and boy, he really delivered.

TVLINE | As a director, what was the biggest challenge of that episode?
It was a challenge because the episode began with a jumper, so we went out to do location scouting and found this amazing bridge over the freeway. I’m looking at it, going, “Well, yeah. This is terrifying being up here, but how are they going to possibly put an actor on the other side of the railing here on the 110 freeway?” They’re like, “Oh, we’ll harness him in….” And then of course two days later they came and said, “We can’t do that.” So we decided we were going to green screen but actually green screen on location, so we had to build a section of the bridge on the bridge, set back, and then get a crane up there…. It was a real puzzle.

TVLINE | Now we have slithery Phillip Stroh coming back for the two-part finale. I have to imagine that’s particularly exciting for you since he was such a key part of The Closer‘s final Brenda storyline.
Oh, yeah — and I think it’s going to be satisfying for the fans because they know him from before. I sort of got a chance to bring back all that history, which in a way fueled the story with some extra energy. 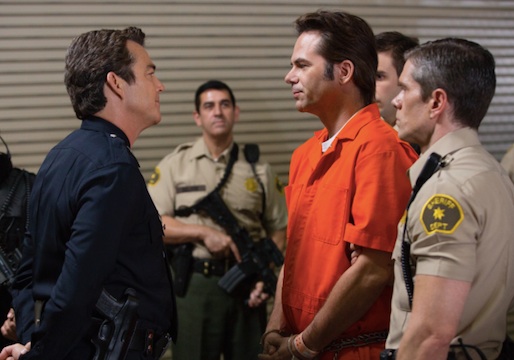 oes Fritz get to give his two cents to Stroh in person?
He’s got some direct relations with him, yeah, which is good. And it’s an interesting story because Stroh’s been in prison, and now he is trying to negotiate a better sentencing by giving information on an upcoming murder. He presents as saying, “Hey, you know what? I’ve collected information over my time in prison on an upcoming serial murder that I can give to you.” So it just deals with this issue of: How do you actually negotiate with this bad guy? And then of course the murders start happening so the clock starts ticking….

TVLINE | Speaking of S.O.B.s, what’s the S.O.B.’s role in these two episodes?
When those murders that he’s negotiating with actually start to happen and there’s a serial element to it, they bring in the Special Operations Bureau. The catch phrase they’ve been using about Special Operations Bureau — which in real life they actually say — is, “When Los Angeles has a bad day, they call the LAPD. But when the LAPD has a bad day, they call S.O.B.” They have a SWAT Unit, a dive team, an air unit…. All kinds of toys. They’re trained to deal with things in an immediate way, and so for something like this, where the clock is ticking on murders that are going to potentially happen at set times, Major Crimes just needs an extra hand.

TVLINE | When I spoke to [series creator] James Duff a couple of weeks ago, he said that with the transition in management at Turner, 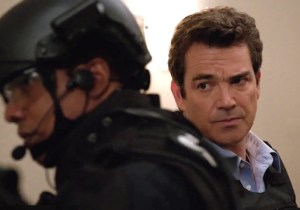 the potential S.O.B. spinoff status was a bit up in the air. Is that your feeling as well?
I mean, we’re still very much in the process of talking about all of that. They [at Turner] have been dealing with their own internal restructuring, so certain things have just been put on hold — not necessarily by any correlation to the projects but just because they’re sort of getting their ship in order, and then they’re going to start making those decisions. I think we’ll have decisions about that though soon.

TVLINE | I know you’ve been playing Fritz for a while, but it’d be probably exciting to play this more active version of him.
James is really, really good at keeping things alive and fresh and ever-evolving, and when we talked about it the first thing I asked him was, “Are there stories you want to tell? It’s not just about keeping, like, a franchise going?” And he has many, many of them, so that is exciting as an actor. Plus, it’s always exciting to work with writers who have known you for a long time. That doesn’t often happen in this business.

TVLINE | Major Crimes itself has never really been in limbo as far as getting renewals. Are you at all surprised that the spinoff has chugged along the way it has? Because I admittedly was skeptical. When they announced it, I was like, “Hmm, are we going to the well too often?”
No, I totally understand that skepticism. I think every new iteration, every show, sort of has to find itself, and I think this show really did. It’s been very encouraging that the fans have loved these characters and wanted to spend time with them, and at the end of the day, these character-driven pieces are what people tune into. It’s not just that particular plot. I think that was a decision made early on in the process, to make it a character-driven procedural as opposed to a plot-driven. Just looking at the character I play, he’s shifted away from the FBI and is taking over the Special Operations Bureau, and they brought up some health issues…. It’s very interesting what James is doing.

TVLINE | If S.O.B. comes to pass, is this where Jon Tenney can maybe call in an impassioned favor from Kyra Sedgwick and get in a necessary cameo?
Well, we had dinner the other night as a matter of fact…. You never know. We’re still very close, so that’s good!