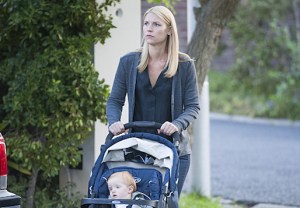 Addressing criticism of Homeland‘s Season 4 finale, Showtime president David Nevins acknowledged that there was discussion about extending the final climax across the last two episodes, but it was decided to go a different way and wrap things up quietly in D.C.

Nevins also weighed in on recent complaints about Pakistan’s “grimy” portrayal on Homeland, opining that the flak won’t spook producers as they shape Season 5.

Reflecting on the finale, Nevins said, “I will be honest: I was a big advocate of going back to D.C…. I knew that the action climax was in Episode 11, but I think it’s OK to shake it up.

“The show has always been about action and suspense, but also about the personal side,” he pointed out. “I thought it was really important for Carrie to deal with her issues with motherhood. If we had not touched on that in the last episode, the season would not have felt complete. I happened to love the final episode…. You don’t always have to end with the most climactic story stuff.”

Homeland‘s latest run also raised the hackles of some Pakistanis by depicting the country’s capital of Islamabad as a “grimy hellhole” — backlash that Nevins believes won’t influence the show’s producers moving forward.

“I hope it’s not considered at all. I really, really don’t want there to be any limitations,” he said. “They’ve never shied away from anything difficult.”

Other topics covered by Nevins on Monday at the Television Critics Association winter press tour:

Other announcements made by Nevins:

* Nevins feels good about both House of Lies and Episodes also being renewed, though there was nothing to officially announce at this time. (Shameless‘ license term was up and thus demanded a decision.)

* Coming off its success at this year’s Golden Globes, Season 1 of The Affair will be rerun in full on Fridays at 10 pm, for 10 straight weeks.

* On what has become the semi-annual TCA topic of Dexter living on in some form, Nevins said, “As long as I sit here it will be part of the ongoing conversation,” but “there’s no active development going on at the moment.”

* Teasing Nurse Jackie‘s series finale, Nevins said, “It’s funny, it’s frustrating, it’s emotional… All the things that Jackie is. It’s a lot of complicated feelings at the end. I will say that I cried.”