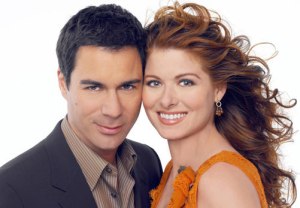 Pretty soon, Eric McCormack and Debra Messing will be on your TV, together, on NBC. And no, you haven’t somehow time-traveled back to 1999.

The Will & Grace stars will reunite in an upcoming episode of Messing’s The Mysteries of Laura, the network announced Monday.

Devlin becomes the lead suspect when his wife is murdered. And guess who’s leading the investigation?

Both McCormack and Messing won Emmys for their portrayal of a gay man and his neurotic female best friend on Will & Grace, which ran for eight seasons on the Peacock Net.