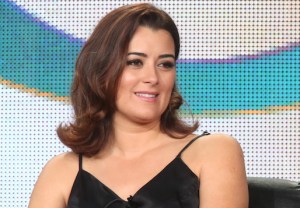 Exactly a year-and-a-half after the news first broke that she and NCIS were parting ways, Cote de Pablo has answered many burning questions about Ziva’s “rushed” exit storyline, the “outpouring of love” she felt from fans and whether she’d ever return to the CBS drama she called home for eight years.

Following her appearance at the Television Critics Association winter press tour — where she was promoting the upcoming CBS mini The Dovekeepers — de Pablo said that after her break from NCIS, “I took a couple of months off, and my entire family came over which was really great. They knew that it was a tough transition for me, and within three-and-a-half months I had an offer,” for the Chilean miner biopic The 33.

“For the most part I have had incredible opportunities knock on my door — I have read them, I have been not quite interested,” she said. But The 33 afforded her both an opportunity to return “home” to Chile and work with “incredible people” including Juliette Binoche, Antonio Banderas and Gabriel Byrne. “I thought, ‘My god am I ready for this?'” de Pablo relates. “And I was ready.”

Invited by TVLine to reflect on and assess her NCIS exit storyline, which was folded into the first two episodes of Season 11, de Pablo admitted, “I think it was rushed. I would have liked a little bit of closure. But I think all in all I could not be more blessed, because I got a chance to be with my ‘love,’ Michael [Weatherly, who plays Tony]. Any time you put Michael and I together there’s going to be a spark, and there’s going to be real honesty, and for that I am forever grateful. Because in that sense there was a sense of conclusion as far as what [the characters] felt for each other.”

As such, and given that she got much-needed personal time, de Pablo attests that she has “no second thoughts” about ending her NCIS run. “I’m very happy with my choices. I spent time with family, which was incredibly important for me. I’ve had time to deal with me, which I couldn’t really do for a long time, so I’m blessed for that.”

Of course, a chunk of the NCIS fanbase reacted strongly to losing de Pablo and Ziva, with an “ouptouring of love” she says was “humbling.”

“When you make decisions like this, you never expect for people to fully understand,” she added. “So it was really delicious to feel that kind of love and I’m always grateful for that.”

So, might she one day reprise her role as Ziva, even on a one-off basis? “I think the fact that they never killed the character off is very telling,” de Pablo noted with a smile. “Under the right circumstances, I think it could definitely be explored.”

As for locking into another series regular TV role, de Pablo let out a hearty laugh before telling TVLine, “I’m not sure if I’m ready to sign a  6- or 7- or 8-year deal. I did a long run [on NCIS] and it was remarkable and I learned a lot.” That said, she’s game “if it was the right story. If we could keep up telling a really good story, that’s the most important thing if you’re an actor.”