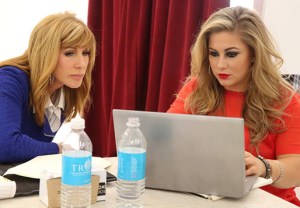 It was not a good week to be a pro-athlete on The Celebrity Apprentice.

The first challenge required Team Infinity to nominate someone to pose in a photo shoot, and the ladies didn’t exactly exhibit model behavior — see TVLine’s video of Kenya Moore’s minor freak-out — ultimately resulting in their downfall.

Despite everyone’s suggestions in the boardroom — both Brandi Glanville and Vivica A. Fox were ready to throw super-shopper Kate Gosselin under the bus, while Moore slapped a target on Glanville — the Donald ultimately dropped his mighty axe on Team Infinity’s project manager.

First Celebrity Fired: Jamie Anderson, who was way too nice for this game to begin with. Don’t weep for her; she’s in a better place now.

The second hour required each team to run a pop-up wedding dress boutique… with a twist! Donald Trump made Fox, Gosselin and Shawn Johnson transfer to Team Vortex, while Johnny Damon, Ian Ziering and Terrell Owens were forced to join Team Infinity.

The dramatic foreshadowing began immediately, as Glanville pointed out Owen’s lack of motivation (layered over a shot of him downing a giant sandwich, no less). And even though Glanville ducked out early due to a “panic attack” — which, of course, Moore attributed to Glanville’s fear of her — she ended collecting a butt-load of donations right away.

Second Celebrity Fired: Terrell Owens, who — despite always dressing like a winner — never seemed like he really cared if he lost.

Do you think Anderson and Owens deserved to be fired this week? Drop a comment with your thoughts on the results below.